To Sci Fi fans, it is almost impossible not to craft a story that plays with multiple concepts. Be they time, science, philosophy, religion or even socio-political. Sci Fi has the weight to balance many singularly or  as a multiple. Within AAMA, the graphic novel by Belgian writer Fredrick Peeters, we have a fascinating meditation on multiple themes that is incredible ambitious but falls at the last. 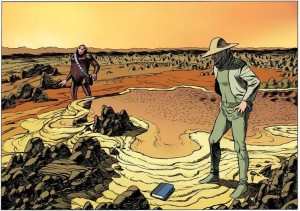 When Verloc Nim meets his brother Conrad while laying down in the gutter, it could be considered a new low. Verloc is a bum, addict, holder of a restraining order to not see his daughter and loser of his family business. Conrad on the other hand is a pilot, captain and body of authority. He is on a mission to Ona(ji), the last planet on the edge of the universe. Hidden on that planet is a new step in the evolutionary process. It is called AAMA and Conrad must collect it before it is let loose on the world. 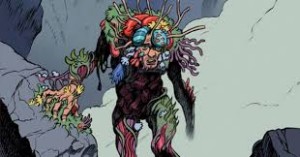 As is the case, often critical voices try to relate works to others in that now haphazard but logical process called Group theory. Some have likened AAMA to the great works of Sci Fi lore. Aldiss, Dick and Huxley have all been dropped, even a comparison to Lynch and Kubrick have been thrown out there in passing. Though tangible, I would say that for me it is easier to attribute much of this series to the study of Biology, Ursula Le Guin and Jodorowsky. 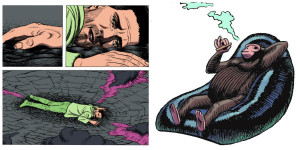 However absent these comparisons can be, Peeters deserves to be addressed in his own merits. He has constructed a universe that is at once highly plausible and highly engrossing. Peeters keeps the story present with exposition that adds texture and notes those traits that we come to find both tender and tragic. 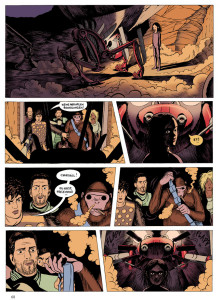 He allows the story room to grow with the dream like shifts, needed to condense massive themes into palatable doses. However he does not condense them into abstraction. They are given flesh to bone, meat to their gristle. With Churchill you have a character who BOTH humorous and yet the voice of reason. In Conrad, an example of the leader and the failure. Verloc is a balance of many different themes and allows a protagonist enough reach to be compelling. The art is extremely powerful and feels sometimes like a Darwinian or Dawkensian wet dream. A mesh of Biological dream, meets fantasy, meets nightmare. It adds to the world like a painter adds to the canvas a note of this, hue of that. Like the Geiger images, some of these will hold in the imagination. The body horror sequences reminded me of Tetsuo (both the film and AKIRA) as that was technology, this is very much the biology as force of destruction and reinvention.

This all said. I have to pick at one issue. Like many great writers and even greater story tellers, Peeters suffers a fatal flaw. He allows the final third to outplay itself. The last 25 pages are amess. A delightful mess but still a mess.

They take a finished concept, creation and completed narrative and allow it to lose steam. They allow it to lose its advantage. It becomes weakened and though not irrevocable, it still dulls the wonderful build up.