Karl Marx and Fredrick Engles Communist Manifesto is as explosive today as it ever was. It challenges the roots by which society and the worker has been manipulated over centuries. Defining the state of continued exploitation by the Bourgeois, structured under progress and mannered under privilege but still a most brazen use of agenda. Finally informing the reader of the future state of a free society. One that challenges the status quo and via the communist party establishes freedom for this capital exploitation and political tyranny.

I first read the Manifesto Communist as a 15 year old. My

mother was a Marxist agent and sympathiser and felt that it would allow me a chance to view the world from a more balanced and informed stance. It did change my world view certainly. It opened up the realms of economics and sociology. It also made me release the inherent problems with the ideology. This is what I feel Rowson gets to here. Rowson uses motifs visually to represent the anger in the argument. He uses stunning embellished art, to produce images of shock horror. These are always tinged with pulverising force. The jar the readers established notion of the piece. The notion of a simple and maybe absurd series of ideas into a polemic work. 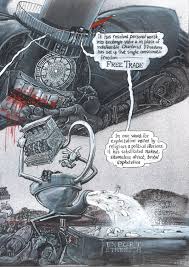 Then Rowson uses the discourse within the book to great effect. Sifting through some of Marx’s rolling but incredibly well defined thoughts. 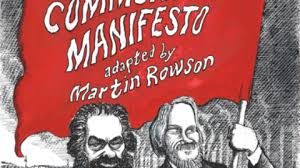 Diffuses enough of the theory and establishes an even and dare I say, easy read. Both of these two however do something else. They counter pose the issue within the piece. Marx and Engels were of the very Bourgeois that they rallied against. So as to being the established face of a new force to guide the enslaved. That subtle and wry note is not lost on me. Bravo Martin Rowson. Bravo.