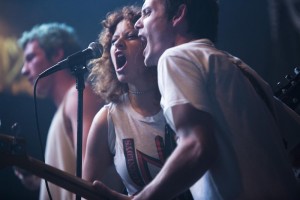 Green Room is a nasty piece of work. It really is. And yet writer/director Jeremy Saulnier probably wouldn’t have it any other way. His follow-up to the stylish (and also slightly icky) Blue Ruin is certainly a step-up in the gore stakes; seeking joy in its ability to stun, startle and confound, despite trips into the most tried and tested of horror tropes. Saulnier ekes life out of the predictable, delivering his tricks with such a kinetic ferocity that it hits the viewer right between the eyes. The stomach is likely to turn, churn and contort with unease or even sickness (as has been reported at some screenings).

Starring Imogen Poots, Anton Yelchin and Patrick Stewart, the first quarter plays things slow and much like a fictional companion piece to Penelope Spheeris’s esteemed punk rock doc, Decline of Western Civilisation. Focusing on the fortunes of a grab bag bunch of misfits in a hardcore punk band, ‘The Ain’t Rights’, they ply their trade in the dingy gig venues off the beaten track.

This takes them to a remote skinhead venue stuck out in the sticks. Greeted with a tense atmosphere, their backstage warm-up space is the titular green room. With little lead time, they are quickly playing in front of a feisty and confrontational crowd. The band are equally confrontational. Bottles are thrown from the get-go. The band finish their set unscathed. It is only once they depart from the stage that things go awry, when they observe a dead body lying on the floor of the green room. From there, they become entangled in a pressure cooker situation of distrust and bloody retribution. 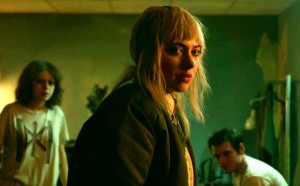 The green room itself is a space so grim and dirty that only an over-exuberant and bullshit heavy London letting agent would be able to sing its praises. This is claustrophobic fare that aims for the throat. Saulnier’s work manages to capture the heady lure of aggressive musical expression and the fast-tracked unravelling of social mores in a perilous situation. There’s a point late on where a dog is loose and rather than take to the tangle of the woods, he sticks to the path. The humans, on the other hand, distorted by the preceding events, navigate through the murk. The dog is sticking to his nature, but the humans have lost their way with theirs.

As a piece of genre filmmaking, this is successful, but it is a genre flick. The execution (pun intended) might offer some thrills, but this is an out-and-out genre flick underneath the bells and whistles of vitalised direction. Those of a nervous disposition might be best to turn away. There is more ketchup up here than a wholesale cash and carry supplying a Wetherspoons. Green Room might be the queasiest cinema-going experience of the year.