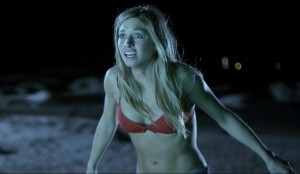 What you really need to do for Isaac Gabaeff’s The Sand is sit back, chill out and prepare yourself for a ride of thrills and laughs. Clearly not taking itself too seriously The Sand takes two troupes that audiences know work well together; drunk young people and a mysterious monster and makes them collide in a satirical, all knowing fashion. Think Sharknado meets The Cabin In The Woods meets And Then There Were None.

Gabaeff’s story finds this group of hungover twenty somethings the morning after the night before. Through a series of flashbacks the audience are shown a huge group of guys and girls dancing, drinking, making out and generally making fools of themselves in the middle of the beach. There is no one else around and they aren’t disturbed. But there is a sense that something more is going on between some of the characters – are the pairs matching together correctly or is there some bad blood amongst friends? The next morning eight remain – waking up from their drunken slumber to a stunningly beautiful, clean sandy beach. There have no idea where the others have disappeared to. As one of them goes to stand on the sand for a stretch, she is quickly and uncontrollably pulled towards the sand where tiny tentacles seem to be exerting some kind of force on her. Having fallen to the ground, been ripped apart and then swallowed by a monster beneath.

Just as Jaws stopped being going back into the water, The Sand is surely to make you think twice before stepping back on to your local beach? Each of the group go back and forth between believing, sensing danger and trying to work out what the best course of action for their survival will be. But what is really great to see of Alex Greenfield & Ben Powell’s script is that they often subvert the characters and whereas traditionally it is the six packed jocks that would usually save the day, it’s actually the beautiful bikini clad women that come up with the plans to get away alive. They are thrown into action when they guys just assume they know what to do. Due to these subversions of expectation, the pace of The Sand is smooth and lively, never with a dull moment. The fact that the entire film take places in one small area of a beach without characters coming and leaving is also a testament to the skill of those both in front of and behind the camera. Think of the traditional locked in mysterious of Agatha Christie and that ilk, where a killer would move around without being caught and murder everyone in one building – The Sand takes the same concept but places it outside instead; this group has no where else to go. Imagine being so claustrophobic in the open air?

The film also succeeds in carefully balancing humour with thrills; the CGI of bodies being ripped apart as they hit the sand is brilliant, it looks almost real

and makes the audience jump back in horror as the film truly gets under the your skin. But this is paralleled against jokes; penises drawn on faces and throwing hot dogs towards the sand to see how far the monster reaches. The tension of The Sand is also worth celebrating as the monster itself is for the most part off screen and this keeps the minds of the audience running over and over trying to make sense of what is going on in this world, for these characters.

The Sand is a joy of a film to watch; a throwback to b-movies from generations gone by that like to distort nature and find monsters in the world around.