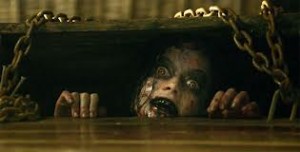 Produced under the consultation of Sam Raimi, Robert Tapert and Bruce Campbell (director, producer and star of the namesake original,) Fede Alvarez’s Evil Dead is being billed, perhaps tactically, as something of a collaborative project. The final product comes across as something more individual. Alvarez shows an understanding of what made Raimi and company’s films work, but is careful to avoid treading too much of the same ground, cleverly sidestepping comparison. Alvarez removes the Ash character, (“because you can’t remake God,” – the director’s own words,) and replaces him with a heroin-addicted / demonically possessed girl, Mia (a majestically deranged Jane Levy.) His success is purposely not trying to replicate what Raimi brought, yet still honouring it. This new Evil Dead film emerges as more of a reimagining than a strict remake, and fares all the better for it.

Alvarez makes immediate pains to separate his film from the Sam Raimi trilogy, most notably in terms of tone. Where the Raimi films 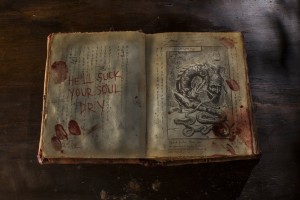 moved increasingly towards silliness and slapstick, Alvarez’s film keeps it all decidedly serious. It’s a risk that not all will favour. Those expecting something that stays in line with the comic tone of the series will be disappointed and may accuse this new incarnation of being trite and humourless, but as Alvarez admits, Raimi already flawlessly remade The Evil Dead as a horror-comedy with Evil Dead II, so why bother to attempt to again? This might seem like cowardice, but playing it straight is a risk in its own right, as the balance can tip easily into unintended comedy.

Seriousness is a path few genre filmmakers are willing to commit to of late, favouring post-modernism and lashings of self-awareness, and there is a reason for this. It is much easier to have the safety net of irony to fall back on when audiences laugh instead of scream. The whole thing was a meta-exercise, a commentary on the horror-enthusiast’s pathology. Didn’t you get it? Alvarez’s film is refreshingly free of any of this. The blood comes in barrels, jaws are removed, skulls chainsawed and limbs detached, and the audience’s lust for it all is left unquestioned. Evil Dead remains largely credible despite an ever increasing barrage of nastiness. It is hard to laugh when your cheeks are stuck firmly in grimace position. It is not exactly frightening; it is all too full on for there to be any real suspense, but it is certainly horrific. 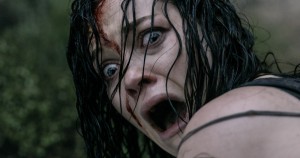 Evil Dead is a horrid, gore ridden film, even by the blood-letting standards of post Saw/Hostel contemporary horror. Die-hard horror fans should find themselves cringing and contorting frequently, but more sensitive viewers may find themselves losing their lunch. This comes largely as a result of Alvarez’s commitment to practical effects. 45,000 litres of fake blood, gruel, vomit and urine were used in this remake, and it looks utterly disgusting. Blood is vomited, rained, sprayed and bubbling from any orifice, organic or otherwise and by the end of the thing, everyone involved is soaked crimson, beaten and dismembered. When one of the unlucky cabin-dwellers is seen to saw their own arm off, there is the underlying awareness that an effects team puzzled over how to make it feasible, and the make-up department put hours into making it look believable. Its crafted grotesquery of the highest order, and while Alvarez’s film may not match the cleverness of Raimi’s film, it doesn’t lack the creativity. Evil Dead was a seventy day shoot, clearly a labour of love. It is genuinely exhausting to watch, let alone make; and if this sort of thing impresses you, then Evil Dead is a rare modern example of a more or less dead in the water approach to genre filmmaking.

Exhausting, unrelenting, Evil Dead chooses the favourable path of constant amplification. Each scene outdoes the preceding one in 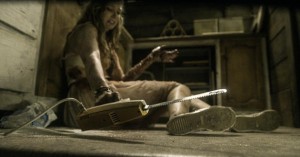 terms of pain, noise and volume of blood to a crescendo complete with the literal raining of blood and a red dressed, red faced Mia standing amongst a sea of red. It’s a glorious ascent that maintains pace at the expense of tension. Tightly put together, Alvarez leaves no breathing room, and allows for no let-up once the violence has erupted. It is purposefully excessive, a skip and a jump from 6 to 11 with the dial left there shuddering until the credits rolls. Those who revel in nastiness will find themselves celebrating each ascension. Those that do not will find themselves either bored or nauseous. Watching Alvarez’s distinctly modern Evil Dead requires a certain stomach, as well as a degree of sadism. It is not particular tense, nor is it smart or funny, but it is markedly effective for what it is, an unrelenting barrage of self-aggrandising ultra-violence achieved through increasingly nauseating effects work, sharp, dreary photography and an brave and utterly fetid performance from Jane Levy.

The Uruguayan unproven director, chosen for the project on the back of an internet posted short film seemed an unlikely selection for
a film with a lot riding on it, but Raimi et al obviously saw something in Alvarez, and their faith was well placed. Bruce Campbell can be seen giving his approval in his post-credits appearance, proclaiming Alvarez’s attempt officially “groovy,” but Alvarez’s Evil Dead is more gruelling than groovy. More in line with the original film’s tagline – ‘The Ultimate Experience In Gruelling Terror’ – than even Raimi’s own film. Perhaps this new iteration has more in common with the spirit of the original than Alvarez intended, if not it’s instant classic status.