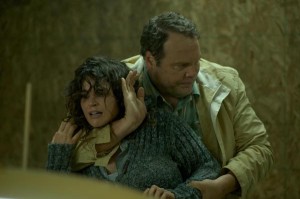 Jennifer Lynch’s latest film, Chained, took to centre stage in Empire 1 during FrightFest 2012 but many were unsure what the film was actually about before sitting down to watch the Surveillance director’s newest outing. Whilst the film was introduced as the programmer’s favourite film of the festival, many were already ready to shrug the film off as part of a filmography, which has never received critical acclaim despite Lynch winning the New York City Horror Film Festival’s Best Director award in 2008 and being the only female director to have done so in the history of the awards. As the daughter of surrealist film marvel, David Lynch, it may become clear why her career is somewhat overshadowed and why the pressure is surely higher for a director who has to live in the shadow of films like Blue Velvet and Mulholland Dr.

Now, we aren’t here to discuss David Lynch, this time the spotlight will be on his daughter, Jennifer, and after watching Chained, I can tell you bloody rightly so. She came onto the stage last weekend, to explain that Chained was an exploration about how monsters are made and what the affects are later in life – this doesn’t really explain what was about to come on screen, but surely made me interested.

Chained is the story of Tim (Evan Bird, and then Eamon Farren) and his mother, Sarah (Julia Ormond) who are picked up by serial killer taxi driver, Bob (a terrifyingly brilliant, Vincent D’Onofrio). After Bob murders his mother, he decides to keep Tim as a protégé, forcing him to clean up and bury the bodies of the young women he drags home. By this point, Tim has renamed Rabbit and must live in the house under certain rules, never get in the way, never eat unless told he can do so and do not try to escape. But as the film continues, we see Rabbit as a quiet, broken teenager who must make the decision between life or death. 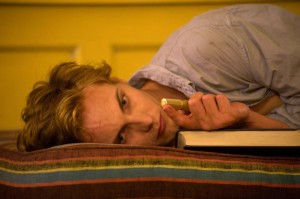 This is a somewhat sparse synopsis for the film, especially in a film where there is so much more to look at. On the surface, a serial killer narrative, watching Bob bring home his victims and killing them but what about how this affects Tim/Rabbit. The film concentrates more on his own personal torture, first at not being strong enough to save his mum (he was eight at the time of her murder) and then following on, not being able to save the other women and to a certain extent – even himself. Bob has the boy chained up in the house, long enough to clean the room where the murders take place and to bury them underneath the house. The touching moments in the serial killer narrative, is when you see Rabbit placing something ‘sentimental’ onto the makeshift burials of the departed.

As the film develops, we start to see two central narratives which concentrate on both our main characters, who hold the majority of the film together in the dark and damp house in which the film is set. One narrative is concentrating on Rabbit, and the decisions he must make whilst growing up – does he give in and take over where Bob leaves off or must he try and piece together a plan to get out? Another side to the story is looking at Bob’s childhood and why he became the monster we see before us. Through a series of flashbacks we see he was abused, and in a particularly graphic flashback, things (and I would admit this freely) start to fall into place about Bob. So the audience are left with many questions to consider, as well as watching one monster trying to develop another.

Acting wise, the film mainly concentrates on D’Onofrio and Farren who both keep the film compelling but also have their weaknesses. Chained, I imagine was a difficult film to keep the steam rolling on -it’s dark and it’s immensely personal (and was also filmed in a very short amount of time), which means the balance between creating a sympathetic serial killer and a weak, broken young man may not have been found. Although the both are brilliant in certain scenes, they all have a slight tendency to moan and whine, which did become a little annoying but that aside they had their strengths. 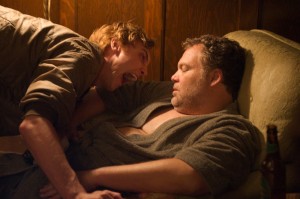 Encompassing, both the acting strength of D’Onofrio and Lynch’s serene stylisation of the film, a sequence where the young Rabbit tries to escape is a particular highlight for me. The film is extremely colourful, which you wouldn’t expect from a film like this but Lynch tricks you into safety at the start of the film. Whereas Surveillance was set in the country, the wide locations where it was emptiness, Chained lulls you into safety. The colour is vibrant and alive whenever the characters are outside, but when inside the house, all colour drains from the screen and instead we are given duller lighting on the dingy walls. A great number of shadows are used in the house to illuminate the areas of darkness around the characters and although they are both given star lighting throughout the film, they are both consumed (metaphorically and physically) by the darkness. Returning, briefly, to the scene I mentioned before – a young Rabbit is left alone in the house and tries to break free through a top window unknowingly Bob is waiting outside for and they have a back and forth, telling Rabbit he has a chance to escape before being knocked down with pelted rocks – it was heartbreaking and stunning to watch.

In discussion with Lynch after the screening, the audience were told that the original story which she was given had more torture porn elements to the film, and the women being killed were done so in much more graphic ways, but she toned that down and decided to concentrate more on the reasons why this has happened to Bob and the repercussions for someone like Tim. She also pointed out, that she wanted to start a dialogue about child abuse through Chained, and talk about it in a way that it hasn’t been done too often. Yes, this is a serial killer, but WHY is he a serial killer – what has led him to this?

Furthermore, the ending divides audiences. Like Surveillance, there is a twist which I didn’t see coming but I enjoyed it. It meant the ending wasn’t wrapped up in a bow (which I wouldn’t expect from a Lynch anyway) but that something had happened, snapped and it was working away at Tim at the end of the film.

Certainly, worth a watch and perhaps even a repeat viewing to consider various other aspects within the film. There is a lot there to consider. A heartbreaking and stunning thriller, which rewards the audience in it’s exploration of the psyche as it delves deep into the human mind.

Keep your eyes open for an interview with Jennifer Lynch, coming next year on UK release of the film.