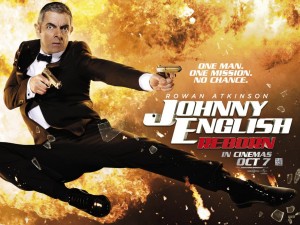 Heralded as the British king of comedy, Rowan Atkinson certainly doesn’t disappoint in his latest spy sequel Johnny English Reborn. And while the entire cast came together for the official London premiere yesterday, Front Row Reviews were on hand to catch up with all the stars as they arrived.

Britain’s favourite accident-prone agent is back for a second-dose of hilarious action in Johnny English Reborn. With an esteemed new cast, an impressive new set and an exceptionally large budget, it’s obvious that the eight year wait was worth it because Johnny English is most definitely back…sillier than ever!

Rowan Atkinson reprises his role as bumbling British spy Johnny English, who is welcomed back into Her Majesty’s Secret Service for a tricky new mission. Following that infamous incident in Mozambique, the once-jilted M17 agent knows this mission is his only one shot at redemption.

English is geared up to stop a group of international assassins, as their ploy to kill the Chinese Premier is set to cause global catastrophe. But in true Johnny English style, saving the day is always harder than it seems. 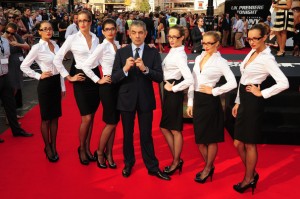 Action-packed full of ridiculous accidents, director Oliver Parker (St. Trinian’s/Dorian Gray) doesn’t miss a trick delivering English in his full foolish glory. Showcasing his unbeatable framework for physical comedy, Rowan Atkinson once again proves why he’s still the most talented comedic actor in Britain.  Presented with quite a challenging genre, Atkinson manages to perfect that intricate balance between action and comedy, best demonstrated through the scene where he chases the Queen around Buckingham Palace.

I caught up with director Oliver Parker on the red carpet, to ask about the special techniques he employs when directing his cast. It seems that his past experiences of theatre acting have influenced his approach to the actors. He said “It helps to understand the process of acting. You see what extraordinary pressure the actors are under when they have to deliver. So it can help, even just empathetically alone, to understand what they’re doing.”