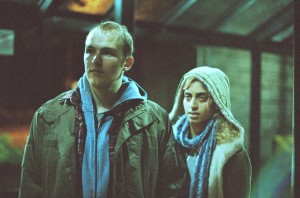 Tim Buckley’s magisterially melodious ‘Phantasmagoria in Two’ marks the opening collage of scenes in Daniel Wolfe’s sizzling debut feature Catch Me Daddy. Making a strange counterpoint to the grim poverty depicted, the plaintive tune toys a tug-of-war with the images projected and offers the audience a state of flux rooted in simultaneous detachment, immersion and dreamy observation.

This surreal conflict raises its head repeatedly. In the foreground, we have mixed-race couple Laila (Sameena Jabeen Ahmed) and Aaron (Connor McCarron). They live a life of squalor. He is out of work and she gets by as a trainee hairdresser. They just about manage to survive and perhaps inevitably, their dilapidated caravan takes a part time role as a narcotic den, offering respite and escapism to its incumbents as they ponder their mire.

Crucially, through a disapproval of the couple’s union, Laila’s father has placed a bounty on their head, and differing factions set out to try and secure them. Faced with these dire circumstances, the pair are forced to go on the run and head further and further into the unforgiving terrain of the Yorkshire Moors. Frighteningly, it is a journey marked with tragedy, as their fortunes hang precariously in the balance.

Wolfe’s CV boasts acclaimed music videos, such as Paolo Nutini’s ‘Iron Sky’, and he has taken his distinctive approach and applied it to Catch Me Daddy. This means that for all of the drained, saturated and exhausted close-ups, there is a visually striking panoramic feel. It is one that manages to capture both the industrial hubbub and the rough, chaotic greenery of the North.

Cinematographer Robbie Ryan complements this take with a misty, gritty hue that evokes his past work on Andrea Arnold’s Fish Tank and Wuthering Heights, and there is a similar feel to Rufus Norris’s brutal cul-de-sac drama Broken and Gerard Johnson’s Hyena. The fleeting kestrel handling scene offers a conscious nod to Ken Loach’s iconic Kes and Wolfe’s use of the aural poetry of Patti Smith’s ‘Land’ is echoed by an arresting visual that rivals Celine Sciamma’s Girlhood’s use of Rihanna’s ‘Diamonds’. 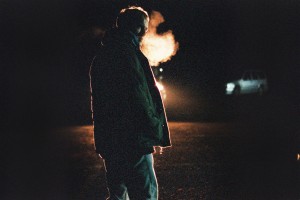 For all of the finesse on display though, it is not all plain sailing for this work. If it weren’t for a powerful denouement, there would be enough ammunition for any charge of mood over substance; as long sinister sections lead into loud, clattering and grisly acts of violence. The tactics could be lifted from a horror film guide 101 and it sometimes veers too close to contrivance. Further, the characterisation is thin. We never truly get to know Laila or Aaron. Their personality is kept at arm’s length. This means that we care little for her situation other than that of an instinctive sadness for her state of peril. But maybe that is the point.

It is rare to see a British film tackle the concept of ‘honour killings’ head-on. Not only does this offer a thought-provoking coda, but a source for conversation and rumination. This rivals Shane Meadows at his most socially acute. Catch Me Daddy is a memorable but flawed work, and is ultimately greater than the sum of its parts. However, no grumbles and/or dissection can quite negate the fact that, in the end, you are left with the impression that you’ve seen something rather powerful indeed. And important.

Catch Me Daddy is available on DVD, Blu-Ray and VOD from 28th September 2015