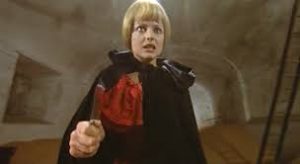 The subversive Joe D’Amato giallo / horror mash up is not as great as many would have you believe but it transgresses as never before. Greta (Ewa Aulin) is abused by her brother Franz (Luciano Rossi). He is an awful man but her lover Dr. Von Ravensbruck (Giacomo Rossi Stuart). After leaving her abandoned pregnant with an illicit child, he then watched her die in child birth. Franz is heart broken but decides to reanimate his beloved sisters body, to abuse her further. She has other ideas… 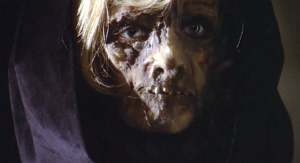 It is an arena of film which has been revisited with complexity and radical thinking, Cinema of transgression. It exploded at a time of social separation in the mid 1960s and into the 1970s. Giallo cinema is awash with woman crossing over to male roles. Even men transgressing into female roles. Then it became something unique. Something potent. Now it often needs to be unpacked. This is very true of the work of D’Amato. He is at his most explosive when he is challenging gender roles. In Death Smiles on a Murderer we have sex and death, woman exacting vicious revenge and then sexuality. 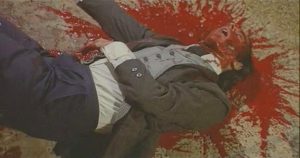 The extras are what you really want to know about here though! 2 k restorations are often a blessing but this has excelled the frankly dismal DVD work into a nice colour grade and that dull wash has been cleaned up. The Top 3? Tim Lucas gives a rounding to D’Amato work from this to his later films (which I am not fan of). Kat Ellinger exploring the challenge to taboo with great insight, if not a little short. The booklet will be great as Thrower is a great voice but sadly I havent seen it… 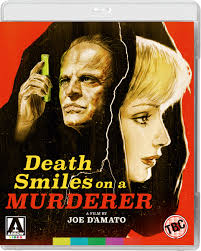