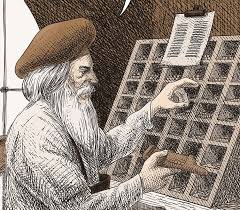 The History and Origins of word fonts might not seem like the place to go for Graphic Novels but the medium proves to be a natural home to a fascinating collection of myths, legends, dreams and dark realites. From its creation in ancient Sumeria, the construction of evolution on the routes of empires from Greece to Rome, onto the creation of the Gutenberg printing press. Split into 11 Chapters, each one detailing the progression of the form. The book aims to detach the blood thirsty history of the world, directing the piece with the tale of craft, creation and culture. All impacting Typography and our world. 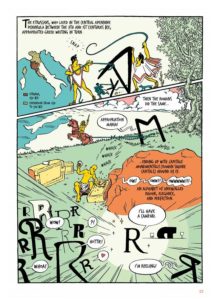 SELFMADEHERO have worked to define their place in the comic industry. Selecting alternative, unique and clever titles from around the forms interesting locations. ABC OF TYPOGRAPHY adds another string to this harp but over its 11 chapters, you really have a series of Upper and Lower case works. You also have the explanation for this term. ‘Upper’ and ‘lowercase’ letters depended on the shelf that a typesetter like Gutenberg used. Capitals were on top and smaller letters on the bottom. Anyway. The truth is that the early chapters from 1 – 4 are brilliant. Aseyn work on chapter one, was rivertingly translated visually. It told a tale, extracted detail and data. Then also remained rich and sparse. Singeon takes this one step further, in Chapter 2. Adding playful strokes that fuse past and current. But its most interesting feat was to explain how Rome imposed empire, simply. Libon in Chapter 3 was another high point. Mixing Goscinny and Uderzo visual style, with a love of textual analysis. 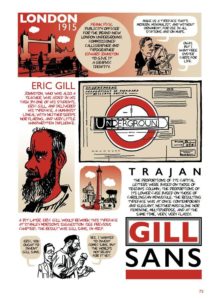 Chapter 4 is the first to focus on a single event. Seyhan Argun does this justice, with beautiful images and a seriousness of pencil stroke. It is the best chapter in the work visually. Art with shade, depth and hue. Then the work falls apart in its midsection. The visually displeasing work of Panique, scruffy and indicepheral chapter 5 makes it hard to continue. Chapter 6 recovers a little bit but is poor in information and Deloye seems to care less about the newspapers visual power then he should. Bourhis chapter 7 is too long and name drops with little potency. Clerisse chapter 8 is all style over substance.  Then along comes Anne Simon. She grabs the reader’s attention (it also helps that Rault seems infused again here) turning to classical comic narration. It works, looks imaginative and gets you re energised. Both Raynal and Ayroles Chapter 10 and 11, let the close and the subjects, which could have been visually dense, become defining chapters in a work that might have fallen. 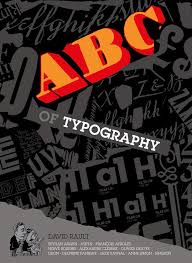 Raynal’s makes the narrative run along by making your eye connect to steps. Ayroles however signposts his movement. This is fun to run over and then return to.

ABC OF TYPOGRAPHY is a work that takes a historically undervalued subject, distils its essence and makes the reader informed enough to take it seriously in future. Often it makes this historical narration tangible with a clever translation. Sadly it falls more than it rises above its limitation and the lack of coherence in some places, creates a disjointed ode to the beauty of letters….