Are you a rock fan and fancy bagging yourself a very exclusive competition prize and piece of rock history in the lead up to Christmas?

Our friends at Peccadillo Pictures have given us ONE copy of new rock documentary, HIT SO HARD (The Life and Near Death Story of Patty Schemel), which has been signed by the legendary drummer herself, Patty Schemel on DVD to give away.

Patty has drummed with some of the greatest rock bands in recent history; gaining her name working Courtney Love’s band, Hole in the early 90’s where she worked on their seminal album, Live Through This as well as working with others like Juliette & The Licks and P!nk. 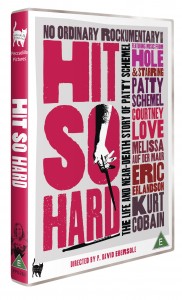 When Nirvana burst onto the scene in 1991, the music they played spoke directly to an angry and disenfranchised generation. Grunge took over MTV and radio overnight but just three years later, the drug-related deaths of several musicians and the suicide of Kurt Cobain closed the books on an all too brief era. Patty Schemel, the acclaimed drummer for Courtney Love’s seminal rock band Hole, was in the middle of all of it. The openly gay woman who always felt different never dreamed she would be in a multi-platinum band, touring with legends or that, thanks to drug addiction, she could lose it all. Given a video camera just before Hole’s infamous Live Through This world tour, Patty filmed everything; the shows, the parties, and startlingly intimate footage of Kurt and Courtney. This footage has never been seen… until now.

Directed by P. David Ebersole, HIT SO HARD is a harrowing tale of overnight success, the cost of addiction, and ultimately, recovery and redemption. Featuring live and recorded music from Hole, HIT SO HARD is an all-access backstage pass to the music that shaped a generation.

Remember, we have just ONE SIGNED copy to give away, and all you need to do to bag yourself a copy is answer this very simple question.

Which Hole album did Patty Schemel first feature at drummer?

Hit So Hard is available on DVD and VoD now from Amazon and Play or click here to rent right now through Front Row Reviews.