The second evenings entertainment at this years Mapping Festival turned things up another notch. The installation for the evening was provided by the very intense and colourful work of Neon Golden. The club itself completely transformed from the previous evening. It is amazing to witness how the same space in Zoo could be given a totally new look using visuals, multiple projectors and mapped video screens. Truly a joy to behold.

The opening set from French DJ/Producer Paul de Valsonje was a good solid start to the night. Accompanying him with live visuals was VJ Lupin – a real eccentric in the VJ world. His work being very stylised and instantly recognisable. This is not a video from the night but is a good indication of his colourful retro style. 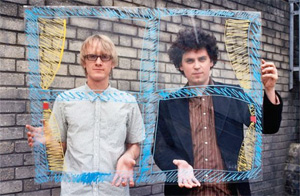 The headliners for the evening were Jas and James – better known collectively as Simian Mobile Disco, the techno legends from the UK. Since last year they have moved away from their full live shows to creating seriously banging Techno DJ sets. The video screens were under control of Kate Moross, a shining star in the world of creative visuals. She was artistic director for their video ‘Temporary Pleasures’ and has gone on from there. She is also an illustrator, graphic designer and photographer. Together the music and the video synced perfectly – delicate and hypnotic. The place was packed to the rafters – this was one of the highlights of the whole festival. If you get a chance to see these guys perform then take it! An example of their work is here…

Rounding off the night with visuals accompanying the Richie Hawtin style of Nemelka, playing minimal techno at its best – subtle and pure, was Neal Coghlan. Coghlan’s graphics were extraordinary. Illustration at its peak, very detailed and great to watch. Lots of layers of cartoon style animation, and exquisitely timed. You could watch this stuff over and over again. Here is a sample of his work.

Over the last couple of years Zan Lyons has quickly established himself a reputation around the world for creating amazing immersive live performances. This evenings performance was a complete road block. Arriving late, the only option was to sit cross legged on the floor in front of everyone else seated in the cinema. This still did not deter people as everyone there was keen to see the man in action. Zan Lyons could be considered a one man audio-visual sensory army. This new show incorporated a live viola, explosive beats, a loop station and haunting, yet beautiful visuals. All created by Zan himself. The result was astonishing – a true interpretation of the phrase ‘immersive environment’.

His work is wide ranging and has been critically acclaimed by Lux, the London Short Film Festival and has had screenings on MTV2 as well as the Cannes, onedotzero and Raindance film festivals. This guy is one to watch for the future without a doubt. If you like the look of the video below – be sure to check out some of his other work. Zan Lyons vs Blade Runner is well worth a look.