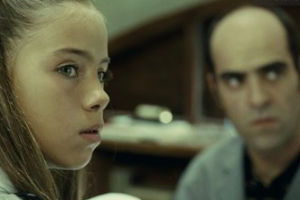 Honestly and truly, Sleep Tight was one of the best pictures to have come out of FrightFest 2012 – this Spanish thriller had it all, a brilliant storyline, acted out subtly but thrillingly by its cast, with very believable dialogue, wonderfully claustrophobic sets and great uses of colour and sound. Looking around, many other critics agreed and applauded this film as well as the members of the audience who sat to watch it during FrightFest, with a standing ovation whilst the cast and crew were scrolling up the screen.

The film, directed by Jaume Balagueró (one half of the team that brought us REC and REC2), follows César (played by the incredible Luis Tosar) who lives an incredibly lonely and repetitive life working as a concierge type character in a traditional apartment block, where the residents come and go daily, some of whom recognise César and the work that he does and some just ignore him and continue with their daily lives. One of the residents that recognises him is Clara (played by the stunning Marta Etura), who always wakes with a dance, skips down with a smile (even if she is late for work), and leaves the building having had her morning chat with César. What the audience soon realise is that César has an obsession with this girl, and in between doing chores in the building, visiting his sick mother and taunting her in the hospital, César has time to return to the building and make small changes in Clara’s flat (and many nights, sleeps in her bed unknowingly to her).

One of things that I admired about Sleep Tight was its nature to really not let on what the story is about till the end, in actual fact you get told at 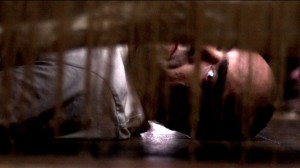 the start of the film but it’s mentioned as a passing comment rather than something that sticks in your mind. The film is rather episodic in nature as it follows each day in the life of César, and in turn the other characters that are around him. This structure kept the film fresh, and each day he came up with a new plan to get closer to Clara. In turn we learn about the lives of older tenant, Sra. Verónica (Petra Martínez) and young girl, Úrsula (Iris Almeida Molina), who is blackmailing César into getting her ‘adult things’ (money, porn) as she has seen him sneak out of Clara’s apartment. I will return to them a little later. In terms of the narrative then, it’s most interesting that it ultimately keeps you guessing until the end and really, it’s a very simple storyline, with a very simple justification by César. Throughout the film, we see him enter Clara’s flat, manipulate things in her flat which will ultimately affect her life (slowly but surely) and each night, drug her in her sleep and then sleep next to her before leaving early in the morning.

This repetition and mystery kept me guessing throughout and in many parts of the film, César comes across as quite medical and exact in his methods – this reminded me of Antonio Banderas’ performance in Almodovar’s The Skin I Live In. The ways in which he seems to be controlling Clara, made me think of the ways in which Banderas has complete control over his patient and anything she does. So the lead up to the film had me thinking that, then the film started and I was under the impression he was in love with her, then I returned to my previous assumption before the big reveal at the end of the film – which in all honesty, isn’t a particularly big reveal and that was one of the strengths of the film. It’s subtly and delicacy surrounding the characters made it an absolute joy to watch. 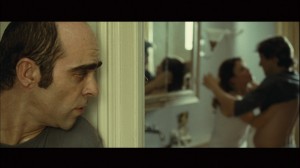 Next, the acting was something spectacular in this film. In particular, Luis Tosar, who stole this film completely. He manages to portray this steady psycho with such intensity and vulnerability that the audience cannot be blamed to side with him throughout the film – not in what he is doing to Clara (and the other residents) but in the hope that he doesn’t get caught and that he can go to sleep and wake the next day to continue his regime of terror. This was particularly clear in the sequence when he is caught by Clara’s boyfriend in the apartment when they were sleeping, I was on the edge of my seat wanting him to escape and get out of the apartment without getting caught. The entire sequence was brilliant, and it kept the audience laughing as he tried to pass the bathroom without being seen by the couple.

Furthermore, the supporting cast of Etura who plays Clara is brilliant in a role, where she is slowly being broken down and although she starts the film looking stunning, smiley and optimistic, she certainly ends it a broken woman. A particular sequence, which stuck in my head was the first time her alarm went off in the morning. Now, I am not the most glamourous person in the world in the morning, I smack my alarm off and just want to go back to sleep but Clara jumps out of bed, puts on the music and dances (like a music video) around her flat, brushing her teeth, putting on the shower water and allowing the light into her apartment. Later on, this does not happen but I don’t intend to give too much away. The other two members of the cast that I mentioned are Martínez who plays an elderly woman living with her dogs in the building – she pays attention to César and is generally a lovely woman, until a conversation with César where he (in a roundabout way) tells her she is going to die alone. Lastly, Almeida Molina, who can’t be any older than 12 threatens to tell on César, she is the only other person who knows what is actually going on but in a horrifying scene between her and César she is put in her place.

I want to suggest a reading of Sleep Tight, which has been worming its ways into my head throughout this review: what I find most interesting 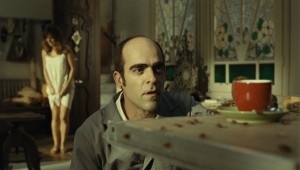 about Sleep Tight, is that all the characters that surround César are females. He seems most interested in hurting the people around him, and for the sake of the film, they are women. Now, this may be coincidence but I believe this is a way into understanding the character of César and seeing why he does what he does.

The scenes have the playfulness of a Hitchcock thriller, they play with shadows and lighting in ways that only the best thrillers do. They manipulate the audience, and by the end you realise how the darkness has taken over the screen and literally is swallowing up the characters as they fall deeper and deeper into some sort of abyss. Sleep Tight really did show off a monster, was scary in a way which is so personal and touching, and I would highly recommend it. Also, don’t look under your bed!