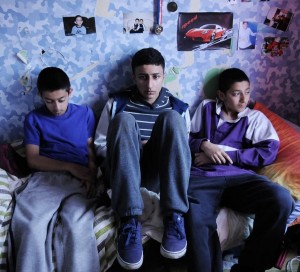 This gentle, touching short follows teenager Hamid as he cares for his two younger brothers in place of their absent father and recently deceased mother, and demonstrates both the fragility and the starkness of life.  Beautifully shot, there is a stillness and a calm attention to detail – peeling wallpaper, a spider, bits of plastic tape fluttering in the breeze – which gives Aleem Khan’s film a sensitive, reflective feel.  There is the inevitable slice of realism in the form of truancy, theft and uncontrolled children running amok, but it is depicted sympathetically rather than judgementally:  with their schoolteacher remaining anonymously out of focus and their father appearing only briefly as a detached, untrustworthy figure, the three brothers seem to be lost, neglected and forced to unite against the world.  Hamid carries all the weight on his shoulders, as symbolised through his care of his pet chicks – the more they accidentally die through lack of correct care and tiny slips of attention, the more Hamid’s devastation grows at the crushed bits of shell and the pitiful dead creatures.  It is as if life is throwing him tests to pass and ultimately the story becomes about the pathway to manhood as well as the importance of parenthood.