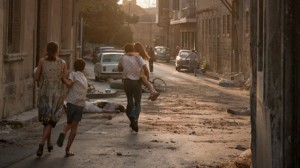 Set in Cyprus during the 1974 Turkish invasion, The Palace is an unflinchingly brutal short film focusing on a family hiding in an abandoned palace. It does exactly what a short film should do by encapsulating the feeling of a certain time and place. The sound of breathing, beating hearts and a baby’s muffled screams are all magnified to create a sense of extreme tension. With no time to waste, The Palace captures what many war films take hours to mildly grasp; think the wheelchair scene in The Pianist on repeat for fifteen minutes and you can just about fathom how intense the film really is. The sense of claustrophobia and realistic nature of The Palace are so unbearable yet utterly impossible to turn away from.

Director Anthony Maras explores the loss of innocence and death of innocents during a time of fierce conflict.