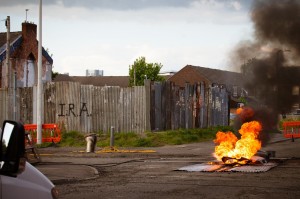 Yann Demange’s debut feature film, ’71 is a delicate, intense and intelligent portrayal of one man trying to get home alive. Gary Hook (an incredibly talented Jack O’Connell) plays a young British soldier who is sent to Belfast at the start of The Troubles in 1971 when the situation was getting worse due to the IRA terrorism and different sections of the land being split up. During a deadly riot, which in itself is an exemplary example of Demange’s incredible filmmaking talent, Hook and his comrades are trying to control the fighting but he soon becomes separated from his unit, who leave him alone on the streets to try and get back for himself. Here is when the real narrative drive begins; ’71 is primarily set over one night watching him try to get back to his base but along the way he meets people who want to both help him and kill him.

Hook along with the other men that he is deployed with are newbies, they are fresh faced and just out of training – if anything they are fish out of water. They expected to be sent abroad to fight for their country, but when it is revealed that they are going to Belfast there is a feeling that this is far bigger than anything they were expecting. ’71 pays homage to the same sort of realism in the best war films from Jarhead to Full Metal Jacket. He understands that there is something far more important under the surface of this genre; it’s not just about the fighting and the violence but to get beneath the skin of the characters that the audience are following. To see where they find themselves emotionally as well as physically and Demange does it as good as the best.

This is of course aided by the brilliant casting – led by O’Connell who has certainly come on a long way since Skins, he has started to get a name for himself 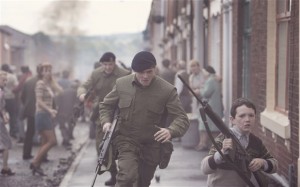 playing the tough guy, but instead of going down a Jason Statham or Vinnie Jones route, O’Connell is much more interested in working on tough film with fully flourished characters and intimate, emotional exposition of his characters. To move from Starred Up to ’71 seems like a worthy move up the film scale and it totally pays off. He moves and balances totally professionally between the anger his young character has about what is going on around him, the caring parental figure to the little boy in his life and the toughness that he is expected to have being in the army. It doesn’t surprise the audience as he moves swift fully and easily between emotions until the final chapter of the film, when he never allows Hook to becomes helpless but instead hopeful and pushes on until the very last moment to get home.

The rest of the cast is just as talented, supporting O’Connell is Sam Reid as Lt. Armitage, Paul Anderson as Sergeant Leslie Lewis and Sean Harris as Captain Sandy Browning. These three men work together to represent different elements of the army; together they act as a synecdoche for the army as a whole – the calmer worker, the twisted double agent and the broken stringent rule follower. The chemistry between the three along with O’Connell is exhilarating and spot on. They go from colleagues at the start to something much more by the end of the film because they are in on a secret that no one else is ever going to understand or be privy to. 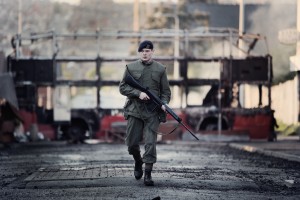 Grabbing hold of the audience from the very first shot, Demange along with his cinematographer, Tat Radcliffe (who also worked on this year’s Pride) and editor Chris Wyatt (This Is England) (Demange, Radcliffe and Wyatt all worked together on Dead Set and the second series of Criminal Justice) have created a tough, hard hitting thriller that is structurally strong, stylish in it’s look and never unsure of where to take the audience next. ’71 is the type of film that so rarely comes along, but it truly analyses the trouble with war and the affect that is has, which reverberates over time. An outstanding effort and highly recommended.