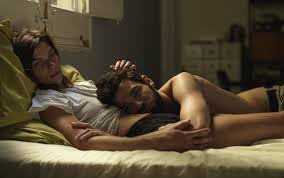 It’s a story that starts with sex and ends with sex – and a whole lot of loneliness and technology in between.  Sergi and Alex are a young Spanish couple who bravely embark on the stark reality of a long-distance relationship, putting their previous plans of baby-making and domestic bliss on hold in order for Alex to pursue a photography career in L.A.  It is not so much a tale of two cities, but of two computer screens; two pixelated faces peering from the confines of their separate living quarters within two cities.  We never venture out from either character’s apartment (or indeed meet any other characters), so everything we learn about their environments is drawn from emailed photographs, Google Map street views and glitchy Skype camera footage – exactly how Sergi and Alex themselves are forced to share one another’s lives.  Predictably the relationship begins to deteriorate over time, as the days are neatly ticked off in labelled chapters, which paces the story calmly and rhythmically like an ominously swinging pendulum.  ‘Day 2’ sees the couple playfully rolling around and pouting down the lens to each other; several weeks later cracks begin to appear as Alex’s work takes priority over giving Sergi her undivided attention.  Surly comments start being made, bitter arguments start being had, tears are shed and all communication is lost with a single, mournful whine of the Skype disconnection tone. 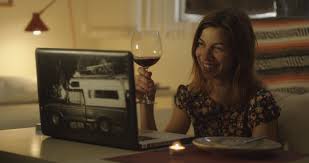 Both actors are admirable in their roles. Natalia Tena is androgynous, stern-faced and driven; her brief lapses into well-spoken English are strangely alienating and serve as jarring reminders of her presence outside the bubble of her relationship as well as her power to remove herself from it.  David Verdaguer, all soft dark beard, tear-twinkling eyes and student scruffiness, represents vulnerability as well as stubbornness.  The good thing about the film is its lack of biasedness towards either person; both are at fault and both have a fair argument.  However somewhere along the way one begins to wonder what overall point Carlos Marques-Marcet wants his film to make.  Is it a tragedy – an emotive, downward spiral of two people falling out of love?  Is it an investigation into whether long-distance couples can last? Or an anthropologic demonstration of how modern-day relationships function in 2014?  Perhaps none of these.  However, as directionless as the story occasionally feels, we do get the eventual satisfaction of seeing the partners reunite, which feels like a structure has been completed.  Although, the strain of awkwardness that ensues is so sorrowful that perhaps one can conclude the film is veering towards the first option after all.  Whilst Alex and Sergi deflatedly make love, the void of emptiness between them is so glaringly apparent that it strikes us how fraudulent the notion is of absence making the heart grow fonder.  When Sergi asks Alex why she didn’t jump desperately into his arms like ‘in the movies’, she responds, ‘What about the next day?’ His darkly humorous answer is that the movie characters are ‘still unhappy; they take it to court and get divorced.’  It is a simple moment of black comedy that mirrors the couple’s own state and concludes the film:  grand gestures such as flying across the world to surprise the other person will not resolve niggling marital issues – a flawed relationship will always remain flawed, and no amount of modern technology can camouflage that reality. 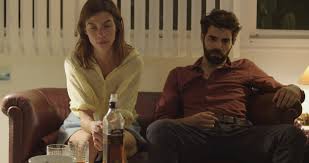