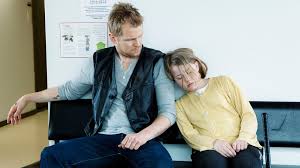 A short spurt of rock music pulsates as a leather-clad but aesthetically pleasing couple park their car and enter a hospital.  She is in for an abortion, and he is angry with the world.  However, after quite literally snarling like a Rottweiler at the other patients so that he can be alone in the waiting area, a winning tomboy child with a hockey stick enters, takes a liking to him and limpets herself to him until he is forced to fall for her innocent charm.  What follows is a kind of unconventional Scrooge-like change of heart. This Finnish short by Kimmo Yläkäs explores the quirky dynamic between two unlikely companions and often veers towards the comical, much to the contradiction of the opening few seconds.  It concludes heart-warmingly: following his flash-in-the-pan experience of compassion and fatherhood, when it becomes clear his girlfriend has changed her mind about what she came in to do, it appears he may have done so too.  Slightly surreal and zany, this story nevertheless makes a neat, uplifting watch.