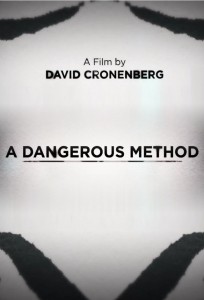 One of the biggest film’s of the London Film Festival was of course David Cronenberg’s A Dangerous Method the story of Freud, Jung and the birth of psychoanalysis. The period drama stars regular collaborators Vincent Cassell and Viggo Mortensen as well as Keira Knightley and Michael Fassbender. There to discuss the project were Cronenberg, Mortensen, Fassbender as well as Christopher Hampton who wrote both the screenplay and the play upon which the film was based.

A Dangerous Method is a very different in terms of genre and style to Cronenberg’s usual fare, but he was quick to point out that he hadn’t strayed too far; “Well I sometimes have to remind people that the first film I ever made was called Transfer. It was a seven minute short and it was about a psychiatrist and his patient, so for me its kind of business as usual. Also if you remember Oliver Reed plays a psychiatrist in The Brood, an old film of mine. When making a movie I don’t really think about my other movies at all they are completely irrelevant to me. I just think about the movie we are making and I often think that the movie tells me what it wants and I do not impose any preconceived ideas or presumptions upon it.”

Viggo Mortensen has collaborated with the Director before on both A History of Violence and Eastern Promises, and this helped to make his decision when offered the role of Freud;“There is a lot of material he wrote and there is a lot of material about him. I was a little hesitate, as David knows, to say yes at first because it seemed like a big stretch in terms of photographs of what he looked like physically. My idea of him felt like a bit of a leap you know. If it had been another director I may have been more cowardly about it, but with David i knew i would be in good hands

Michael Fassbender plays opposite Mortensen as Carl Jung, a role which he clearly researched beforehand; “It’s always easier if there is information available to you and there is a lot on both characters. And then there is the fear, as I’m playing someone with a very passionate and vocal following. So you want to do justice to the character you want to do justice to David and Christopher’s script.”

One would have thought that Cronenberg would have himself been influenced by psychoanalysis when making his body horror movies, but nothing could be further from the truth;“I actually think my horror films have influenced psychoanalysis!” “There are filmmakers like Bernardo Bertolucci who says he applies psychoanalysis to his films and those surrealists such as Salvador Dali. The idea of dreams and dream interpretation was very important to their art. but for me it’s not that conscious.”

A Dangerous Method will be released nationwide from 10th February 2012