Empire Magazine have reported today on David Cronenberg’s (A History of Violence & Eastern Promises) new feature A Dangerous Method, which is screening at the BFI London Film Festival next week. As we still have a while for it’s general release, the UK poster for the film has been revealed featuring the insanely brilliant casting of frequent collaborator Viggo Mortensen as well as Keira Knightley and Michael Fassbender.

A Dangerous Method tells the story of the relationship between psychoanalysts Sigmund Freud (Mortensen) and Carl Jung (Fassnbender), and how that changes when Jung’s adherence to Freud’s theories are challenged by new patients Sabina (Knightley) and Otto Gross (Vincent Cassel). 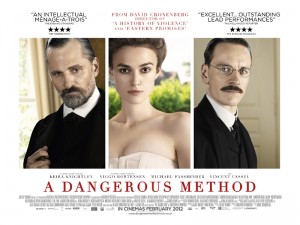 The film is due for release on February 10 2012 and I am very excited for it!