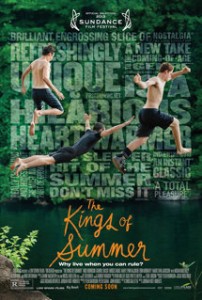 Today marks the release of Jordan Vogt-Roberts’ The Kings of Summer starring Nick Robinson, Gabriel Basso, Moises Arias, Nick Offerman & Megan Mullally. The film has been slowly gaining momentum since its premiere at Sundance earlier this year and even just today made a list of films to watch in 2013, that you probably have yet to see.

The Kings of Summer follows Joe, on the edge of adolescence and finding himself increasingly frustrated by his single father, Frank. Whose attempts to manage his life are making him want to grow up and leave. Deciding one day that enough is enough, he escapes to a clearing in the woods with his best friend, Patrick, and a strange kid named Biaggio. His plan is to build a house there, free from responsibility and parents. Once their makeshift home is finished, the three young men find themselves masters of their own destiny, alone in the woods and figuring out what it means to be in charge of ones own life.

Front Row Reviews recently chatted with Jordan Vogt-Roberts about his first feature, what it was like to build that house and what nostalgia in film means to him.

Initially I was interested as to what inspired Vogt-Roberts to go into filmmaking in the first place, to which he laughs as he looks back. He told me that as a kid, he just fell in love with movies and that whenever he found himself in the dark movie theatre, he was just in awe of what happening around him. Sharing this experience with random people started his love of cinema. He explained that he would always talk about the movies and love to learn how everything was done, always wanting to know more and that as a child, he used to make stock motion films in his basement with his action figures. Growing up in Detroit was difficult and it never seemed possible to go into the film business, especially as Hollywood just seemed so far away. But Jordan simply loved the language of cinema and so at college he decided to “give this film thing a shot,” and take all those ideas of things he loved and put it into something he really cared about.

On The Kings of Summer itself, the story was originally conceived by writer Chris Galletta, who wrote the screenplay when in college based on 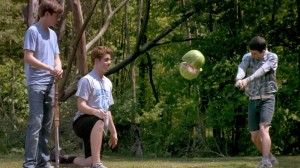 his own experiences. Jordan explains that the screenplay was then placed on The Black List, which is a selection of the best unproduced screenplays that are looking for a director. He admits the film has a tricky tone and could be difficult for a lot of directors. Vogt-Roberts himself had short film, Successful Alcoholics (starring Lizzy Caplan) play at Sundance but he wanted his first feature to be something that he was completely in love with and he adored the idea of The Kings of Summer. If anything he “couldn’t believe there wasn’t a director already attached, I thought someone was playing a joke on me.” He laughs and says the entire teams just “wouldn’t let the film die.”

The film premiered earlier this year at Sundance, which was a dream come true for Jordan, who explains that having a feature play is a completely different thing to having a short there. He believes there is truly no better place to premiere a film and it was down to the fact that everyone was so totally invested in the film that it was made. He laughs that no one prepares you for the emotional processes it takes to make a film but that he loved getting totally invested in this really wonderful, bizarre world. Thinking about what we had touched on thus far, the film itself has a very clear level of nostalgia and the feeling of the Amblin movies of the 80s like ET, Gremlins, The Goonies and Back to the Future. But was this something Jordan and writer, Galletta always aimed to do? He admits that he is both nostalgic and realistic and loves to find the balance between the two. He admits that as a kid, he always had a sense of thinking that he didn’t want to grow up and not have this again. This left him with a sense of sadness, but this is what helped him make The Kings of Summer. He admits there was always a feeling for Amblin films with this but they wanted to find the elements of those films that people loved and make them contemporary. He then quoted me Bill Watterson, the creator of Calvin and Hobbes, who said that nostalgia for childhood clearly means they never had one and yet Jordan points out, the comic strip itself was one of the best pieces of nostalgia but it had a sense of darkness to it. The Kings of Summer was meant to transplant the audience to a different time & place with intense freedoms and joys but also have a real darkness about what being a teenager is like. 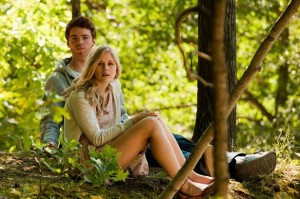 On that note of tonal shift, The Kings of Summer manages to balance shifts between drama and coming of age comedy, which Jordan admits he loves. In his favourite films, the directors and writers play with tone and challenge the audience with the story and characters. He pushed the original script even further, “making the highs even higher and the lows even lower.” He wanted scenes that were heavy but would lighten up quickly with a light joke or a funny scene that had something sad about it. By testing the audience and getting them invested in the story in this way would show them this is the characters lives and they would go with it. Jordan says, “life is a spectrum of ridiculous things all happening at once.”

In casting the film, he admits he needed funny adults who ended up portraying these

amazing characters (I mentioned names like Nick Offerman and Megan Mullally). These were comedians that were incredibly talented improvisers but they also portrayed a sense of what Jordan calls “crazy.” With the kids, it was a different matter. It took a long time to cast the right kids as he didn’t want 25 year old portraying these characters, he wanted actors whose bodies and minds were still developing. After a long search and they found their three (Nick Robinson, Gabriel Basso, Moises Arias), they were taught improv, less for the film itself and more to feel comfortable in their own skin and be themselves. Jordan admits, “I’m not 14 anymore,” and laughs. He wanted the kids to have a chance to bring themselves to the roles and he placed a lot of trust in them. On that note, I suggested there was a sense of realness to the kids and the ways in which they moved and spoke. The Kings of Summer for the most part doesn’t feel like it was written by adults but rather kids that age. He laughs and says that in the USA they were rated R because of the swearing but they weren’t blowing up buildings like many other recent films with lower ratings. They said fuck a couple of times and that is the way kids really speak. Some of the script was filmed verbatim but sometimes it was just the kids chatting that made the script. He does credit Galletta for this amazing way he managed to capture kids with his words. 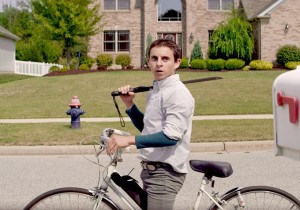 I was also intrigued about the incredible sequence in which the house is being built and that by the end of that, the sense of achievement in the boys eyes was just brilliant. Jordan explains that was all movie magic and that actually that sequence is the kids taking the house apart. It was filmed after the fact and towards the end of the schedule. “By that point, the kids and us had such a rapport that we could just chill out.” He also explains that the montage is made of things from the entire shoot as everyone was getting to know each other. In terms of the house itself, Jordan wanted to create something that you and your friends could have made one summer if they really put their minds to it but he wanted it to be iconic and big enough to also aspire to, without too much art direction. In designing the house, the aim was to make something memorable so that it would be remembered as the house from The Kings of Summer. Jordan tells me that he spoke with an architect beforehand and wanted to know what this house could look like if built properly… but then what would happen if kids screwed it up along the way. With this idea in mind, the house provides a sense of heightened nostalgia, giving the audience a feeling that they wish they had experienced this when they were younger and that really they could have… it is realistic.

So just as we are about wrap, I ask Jordan what is next for him and he laughs, telling me that he is just getting used to real life again post movie. He 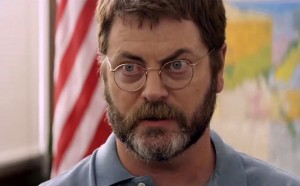 is remembering what it is like to be an actual human being. But in the meantime, he is going to be working on some commercials and says that when the next film does come along, it should be something he really truly loves. In the pipeline, there are a few ideas for film & television but he holds them close to his chest, admitting they may be revealed soon. Really Jordan Vogt-Roberts just wants to give people a reason to get back into the cinema and have that theatrical experience. He wants to tell fresh stories and show people that getting into the dark room with a bunch of strangers is one of the most brilliant experiences you could have; it is eye opening and it is sharing.