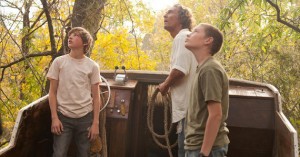 The films of Jeff Nichols are all very much informed by the South, none more so than his prototypical frontier fable, Mud. One of the most impressive and consistent American filmmakers currently working, Jeff Nichols has now made three sprawling dramas where the ways and workings of the South play as large a part as the characters in the way things turn out, with Mud being the most typically Southern.

Following the much lauded, and deservedly so, paranoiac eco/economic drama Take Shelter, Nichols moves his focus from Ohio to Arkansas for Mud, taking just as great a command over the environment as he did in that last film. Almost as much landscape film as plot-driven drama, Mud has a sense of wonder about the natural environment that brings immediately to mind another American visionary, Terrence Malick, though where the vaguely comparable Beasts of the Southern Wild (also a nature-minded Southern drama surrounding a low income rural community) more or less lifted Malick’s style, right down to the whispered faux-poetry, Nichol’s film only makes inference to it. 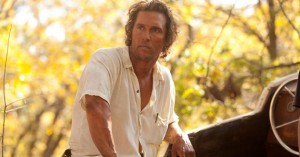 His visual style is his own, and more so than Take Shelter, Mud is stunning. Intercutting the narrative scenarios with soft-focused close
ups, in turn scuttering insects, sandy bootprints and the rusty tin shanties of the riverboat communities, as well as some beautiful wide shots of the gorgeous scenery of the Southeast Arkansas locales, Nichols styles his film with some arresting images that imbue his film with a real sense of place, whether township, estuary or isolated island, as well as a sense of rhythm that is complemented by the ever present, sometimes ominous, sometimes rapturous score.

This rhythm is aided by the storytelling, the visuals and score creating a sense of wander, but the script keeping things tight and watchable. Nichols control of pacing in this is pitch perfect, making for a film that whilst running just over two hours, remains largely engaging. Nichol’s film could fairly be decried for its unnecessarily heavy plotting, plot points that push credibility and overdramatic character motivations. though this would be missing the point. Mud, as a piece of modern Southern folklore, exists in a constantly heightened state, heart on sleeve, finger to trigger, painted in broad, emotional strokes, but pointedly so. 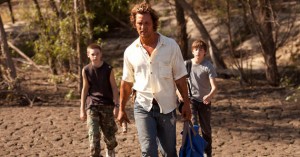 Exploring distinctly Southern values, work ethic, integrity, honour, trust and honesty, as well as more unversal ones like the battle between old ways and new and the question of masculinity, Mud celebrates the Southern genre as much as it dismantles it. The cast were apparently asked to read Mark Twain’s Huckleberry Finn before shooting, and it is not difficult to see why, the resulting film a modernised, but familiar feeling rural coming of age story.

Following two boys, Ellis (Tye Sheridan) and Neckbone (Jacob Lofland,) who come across a wayward fugitive who uses only the moniker Mud (Matthew McConaughey) living in a stranded boat on an isolated island near their riverboat community home, Mud becomes a story that uses these values as its emotional stakes, exploring how both Mud and the two boys find the things they believe conflicted and compromised after they warm to each other and decide to help Mud evade custody.

It sounds a whole lot cornier than it is, but somehow Nichols and his cast really make the contrivances work, mostly by way of solid storytelling and strong performances. The two boys capture the adventurousness and recklessness of boyhood perfectly, as well as the fragility sitting behind the hardiness their rural upbringing has instated them with. Sheridan is favoured as the lead, having the majority of the narrative action occur upon him. Lofland acts as more of an assistant as well as an emotional counterpoint, remaining much more detached from both Mud and the symbolic value that their interactions are seen to have. Throughout the film Sheridan’s character Ellis loses faith in many of the South’s core values, mainly love and decency, as result of disappointments from Mud and his parents, as well as a romantic interest, a subplot which seemed added as an afterthought. Neckbone merely runs alongside him, acting touchingly as  the only stable part of his life.

McConaughey though is what may be seen as the major draw in this film, continuing what he himself dubbed his ”McConnaissance,” a 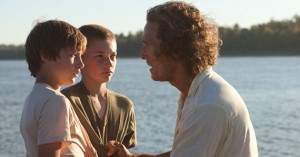 slew of strong performances that mark his escape from his pigeonholing as rom-com frontman. As in recent supporting roles in Bernie, Magic Mike and Killer Joe, McConaughey plays a distinctly Southern sort of character, dangerous but alluring, charming yet conflicted, and this is his finest variation on that theme. He is immediately commanding, attracting suspicion as much as interest from both the boys and the audience when he is introduced enigmatically early on. “You think he’s a badass, don’t you?” Ellis is asked at one point, but McConaughey’s characterisation is much less one-dimensional than that.

Mud isn’t so much an evolution for Nichols, instead a demonstration of his versatility, admittedly within a Southern realm. Take Shelter appeased arthouse sensabilities through a searching look at psychosis and paranoia. Mud should be more crowd pleasing, offering continual movement, big emotional stakes and needed touches of humour, whilst retaining that big, commanding central performance, McConaughey here replacing Michael Shannon, who is present, but only as supporting comic relief. Its slightly too long, though never plodding, and has a climax that is so tightly pulled together it feels almost like an unwanted apology for the open-ended closer of Take Shelter. Both are strong visions from a director with a very distinct and personal voice. Wherever Nichols chooses to go next, expectation will be high.