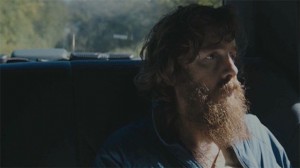 There is something about revenge films. I’ve never been quite sure what it is, but they have a quality that other genres lack. Whether it take the form of an action, or a horror, or a thriller like Blue Ruin, they all carry this quality with them, similar to that of a sports underdog movie, they are incredibly watchable, and we support the character regardless of what happens. Whomever the protagonist, whatever horrible, unspeakable things they do on their journey for revenge, we continue to root for them, and share in their joy when vengeance is finally served, usually through graphic, but satisfying violence. Kim Jee-Woon’s I Saw the Devil, for example, is extremely explicit, but the violence is in the name of revenge, so as an audience we don’t flinch, it is deserved and as such we derive some satisfaction from seeing it dished out. Jeremy Saulnier’s film flips this on its head with his approach to the violence, and in doing so creates one of the finest revenge films in years.

Blue Ruin follows Dwight, played expertly by graphic novelist Macon Blair, a beach bum who learns of the release of the man who killed his parents. This news gives him a new sense of purpose and he sets out on a mission for vengenance. Armed with only his rusted old blue pontiac (presumably the blue ruin of the title), Saulnier’s film approaches the revenge in an incredibly realistic way, moving away from the glorification of violence often seen in the genre. The film is still plenty violent mind you, I found myself often part hidden in my t-shirt, like a child cuddling up to their blanket for comfort. Blue Ruin doesn’t rely on it’s violence though, from the offset the film is incredibly tense, and it doesn’t really let up throughout. One particularly tense scene sees Dwight playing Kevin Mcallister (Real life Buzz Mccalister, Devin Ratray actually stars in this as Dwight’s old friend) and preparing his estranged sisters home for the invasion of several armed men. I still have chills from it.

Blue Ruin is about as subversive a revenge thriller as I have seen, the scripts turns can’t been seen coming. One twist in particular 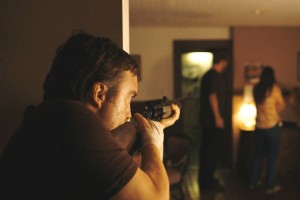 comes early on and flips the film on it’s head (whilst I’ve seen other reviews mention it, and I’d love to talk about it, I liked that it hadn’t been revealed in the trailer and as such am choosing to keep quiet). Our protagonist, Dwight isn’t a gun-toting, stone cold, bad ass, nor is he a kung-fu, sword wielding samurai like in other films of the genre. No, Dwight is a man, deeply and visibly affected by the death of his parents, making it up as he goes along. He doesn’t have time to get a gun through due process, and as a result decides to steal one, or visit an old friend to borrow their’s. The decision to put focus on these attempts to get a gun harkens back to America’s plethora of public shootings, and the proliferation of guns in parts of the country. If you need a gun, you can get one, and Blue Ruin knows it. Unfortunately for Dwight that doesn’t mean he can use it, and it is refreshing to see him make simple mistakes, and just bumble his way through the film’s events. Macon Blair never misses a beat, his understated performance is incredibly believable and offers up a new kind of leading man that we frankly need to see more of.

Blue Ruin has the potential to become a cult classic, and I know that I will be recommending/forcing people to watch it, and will surely watch it several more times myself. It takes it place as one of the finest revenge thrillers of all time, and one of the best thrillers of recent years. But most importantly it is the finest film yet that I have seen come from Kickstarter, which is especially promising considering it’s lack of star power. If Blue Ruin is anything to go by, Kickstarter could finally prove to be the new home of independent cinema, and it’s looking pretty great.