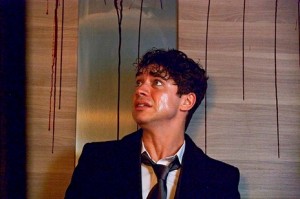 Dementamania begins with a quasi-Patrick Bateman/American Psycho type character, Edward Arkham (no connection to the asylum from Batman in the slightest…) getting up from an restless night of sleep – there are flashes (to another life perhaps?) but other than that, it seems like a normal office worker waking up for another day at the daily grind. Edward says it himself, he wakes up, goes to work, comes home, watches some television and goes to bed – he is sick of it. The whole Bateman persona is pushed harder, Arkham is played by Sam Robertson (who is little known other than his role in Coronation Street, yet he shines in this role) who, without beating around the bush, is a darn sight nicer to look at than other people on screen (or in real life). He has a body (well obviously he has a body but he has a body ;)) and manages to give off that angry bad boy, pissed off with the world look, which makes the southern regions of certain men and women shudder. He wakes from his bed, and director Kit Ryan, gives a long enough opportunity to show off his actor’s body – he works out in his lounge and unlike Batemen who used to love the sight of torture porn, Edward looks at a picture of a fat kid (presumably himself) – so right away Ryan is telling the audience straight away that he is going to subvert expectations with some comedy and that the tongue should firmly be placed within the cheek. From the workout (in short shorts), he moves to the bathroom and stares at himself in the mirror. Of course in American Psycho, this was when Patrick named his cosmetic products as a way to represent the materialist yuppie culture of his time but Edward stares at a cupboard of medication instead. Mysterious.

Yet here is where the true fun of Dementamania begins; Kit Ryan’s second horror feature (after 2007’s Botched) is great – it’s some of the most fun you could 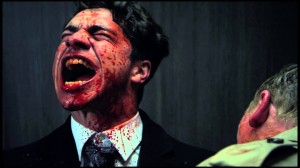 have in the cinema all year and does in fact show off his talent behind the camera. In fact, this is one of the most stylish and exciting horror films of the year (right hyperbole over).

Edward steps on an odd looking insect, larger than it should be and yet crunches just the right amount under his bare foot. Shit! His foot starts to bleed, the bugger has stung him; he cleans himself up and goes off to work.

The course of the film takes place over the rest of Edward’s day, from his journey to work, his day in the office, going out afterwards to a nightclub for a colleague’s birthday and then the long, dangerous and very bloody journey home. Things start to seem a little odd when he is in the lift with one of the pompous pricks that works above him, he taunts Edward up to the point that Edward pounces onto his neck and bites a huge chunk of flesh out… blood everywhere, screaming, loud shattering sounds and yet within a blink of an eye, the audience and Edward return back to where he was before, standing in the lift, listening to bullshit. What just happened?

Well, Dementamania carefully and masterfully blurs the boundaries between the reality that Edward is living and the mad, deranged fantasies that he wants to live out. Well, not all are deranged, there is one stereotypical male office fantasy of two of the rather big breasted women in the office making out (but of course what is a film like this without a stereotype or two?) – it would have been funnier had very heterosexual Edward’s fantasy included an all male gang bang in the office. Alas, this is not the case but Ryan’s playful filmmaking doesn’t stop there – every so often Edward is joined by Nicholas Lemarchand (Vincent Regan), a big man with a lot to say. Although he always seems to turn up when no one else is around – odd don’t you think? He taunts Edward, plays with him and also tells him what he wants to hear but he always pushes Edward on to the next round. 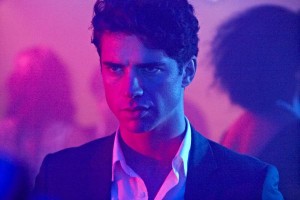 Ryan does his best to alienate his audience and puts them directly in the mindset of Edward, who isn’t sure whether he is coming or going. Things quickly become tense, so as always the best thing to do, is to add alcohol to the equation. And then a pissed off bouncer. A night club. Loud music. Flashing lights. This is a recipe for a perfect night. The sequence in the nightclub is one of the strongest parts of the film, where the claustrophobia of being surrounded by so many people quickly closes in on Edward and the audience, he bumps into an ex-girlfriend and her new boyfriend (who seems rather nice), that the audience already hates. As the audience is so carefully aligned with Edward, in his moments of absolute madness, it seems pretty much like the right action at the time and audience are coerced into agreeing with what he does.

Moving towards the bloody and (not so) surprising conclusion, Dementamania has a sort of Fight Club means Identity thing going on and whilst the film is certainly no David Fincher, that doesn’t stop it having a damn good time whilst it pays homage. A great and fun film, filled with moments of shock and laughter and a horror film that does keep the audience on the edge of their seats until the very end.