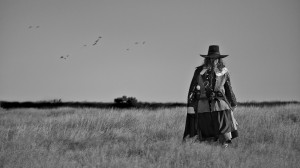 After three successful features in just about as many years, Ben Wheatley appears to have been given free reign creatively. In his latest film A Field in England, he exercises that right liberally and rambunctiously. The film, which oddly seems to be getting more attention for its innovation in distribution (simultaneous release on TV/DVD/VOD and theatres, with Film4 as its backer) than its content,  is nothing if not creative.

Wheatley has always been a figure who makes great attempts to defy classification, and with A Field in England, this at least he has achieved magnificently. His first and most generically compliant film Down Terrace blended comedy with the British gangster model, before his second Kill List inverted that model by morphing into a Wicker Man-esque occult horror in its latter half. Sightseers, a reinvention of Mike Leigh’s Nuts in May mixed what can be called the ‘British bucolic’ genre with the horror-comedy stylings of Edgar Wright’s Shaun of the Dead by having its happy campers reveal homicidal inclinations. Despite genre movement, two points of stability can be expected in a Wheatley film, violence and a distinct sense of Britishness, and A Field in Englanddelivers those two check-ins in abundance, amongst a whole manner of offerings more unexpected.

Let it first be said then that A Field in England is weird. Magic mushroom ingesting, strobe-lighting, black-sun-pulsating weird. More than a few viewers tuning in occidentally to its Channel 4 premiere will be confused and most likely offput. So will a few fans who think they know what to expect. The film is strange. Set in the 17th Century, in an unnamed field in a unspecified part of England, it opens amidst the civil war with a poncey, cowardly individual, Whitehead (Reece Shearsmith), scrambling around in the muck while a number of explosions go off outside of the frame. This opening establishes a few things, firstly the fantastic, pivotal sound design on offer, as the offscreen explosions immediately simultaneously place and disorientate the viewer (in the middle of a war, but why and what is happening?), the bewitching percussive score, and a location and crew, as three other soldiers join the bumbling Whitehead in disarray, before escaping with him inexplicably to the comparable stillness of an empty grassy expanse where the rest of the film takes place.

From here, it is even less congruent, as Whitehead and his unplanned companions (Julian Barrett, Peter Ferdinando, Ryan Pope and Richard Glover, who all remain nameless but establish distinct characters with a comic edge that makes proceedings sporadically reminiscent of Blackadder) wander the field looking for an ale house that is clearly an obvious fallacy well before it is revealed to be. “Beer has it’s own way of sorting things out, does it not?” says one of the men in a line that is typical of regular writer Amy Jump’s amusing script that mixes old-English pomp with more modern hard-edged exchanges. After a while, O’Neill (a brilliantly nasty Michael Smiley) is accidentally pulled out of the ground (yes) and turns the activity sour. Interrupting their Samuel Beckett style wandering, O’Neill takes immediate order of proceedings. After kidnapping Whitehead, who was in turn supposed to be capturing him, O’Neill employs his captive as a occultish compass, leasing him like a dog as he rabidly sniffs out the treasure using some unexplained magical method, screaming all the while. Those involved are as baffled and repulsed as the audience may be. ”It does not surprise me that the devil is Irish,” remarks one of the other men.

The whole bizarre quest is shot in stark black and white, and the imagery is strong even when the writing isn’t. Forward moving affairs are interrupted frequently by moments of complete obliqueness, including one arresting psychotropic sequence involving a mushroom trip that forces Laurie Roses’ cinematography to give way from conventional landscape led framing to mirrored shots, warps, upside down visuals, flashes and strobes and the previously mentioned oscillating black sun. Little of the film makes any clear sense, though a lot of it is interesting and all of it hugely entertaining, and whilst open to the infinitesimal possibility of individual readings (the men are dead, wandering the liminal space of the great English field in the sky, being the obvious one) there may well not be all much there to decode.

Still, its a peculiar and singular film, compared often to Witchfinder General, but strange and idiosyncratic enough to exist alone, and there is merit in its uniqueness and refusal to conform to any standard. Before Wheatley had blended genres and reference points in order to try to create something fresh feeling, yet steeped in a British film history.  Here he is brave enough to genuinely create something new.  Many will react unfavourably to this diversion, perhaps fairly so considering its incomprehensibility, but many will find things to draw upon – the dirty, grisly take on period drama; the psychedelic, obstinately unclassifiable imagery; even the mildly comic script perhaps – and others still will laud him for trying something regardless.