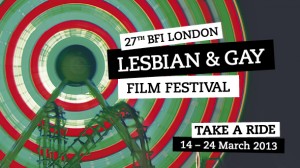 The 27th London Lesbian and Gay Film Festival is starting this week at the BFI Southbank, and of course Front Row Reviews, will be bringing you all the latest news and reviews throughout the festival, which starts on 14th March, with the opening film, Jeffrey Schwarz’s (Vito) I Am Divine. Charting the life of the ultimate outsider, Schwarz’s film shows how Divine transformed himself from the fat, bullied, Baltimore school boy, brave and unapologetic for who he was even then, into the ultimate cult icon first glimpsed in the underground films of the ground-breaking director John Waters.

Divine can also be seen during two screenings of the cult classic, Female Trouble, screening during the festival.

The festival goes all the way until 24th March, with the closing film, Margarita directed by Dominique Cardona & Laurie Colbert (Finn’s Girl). Margarita is the perfect nanny. She cooks, she cleans, she fixes the guttering, helps her teenage charge with her homework and as long as she can take advantage of her employer’s hot-tub with her girlfriend every now and then, has little to complain about her life. But when cash strapped power couple Ben and Gail realise to make ends meet they have to let Margarita go, after 6 years of loyal service no less, we discover that Margarita’s life and the lives of those around her are not all they seem.

At Front Row Reviews, we are looking forward to bringing you a wide selection of reviews from a wide variety of films – from drama, to documentary and back again.

Particular highlights include David France’s How To Survive A Plague, Sophie O’Connor’s submerge, Ester Martin Bergsmark’s She Male Snails, Travis Mathews (I Want Your Love) & James Franco’s Interior. Leather Bar and Michael Mayer’s Out In The Dark. From debut’s to premiere’s to well weathered director’s – we indeed to try and cover as much as possible.

Check out the full listings and to book tickets, here.