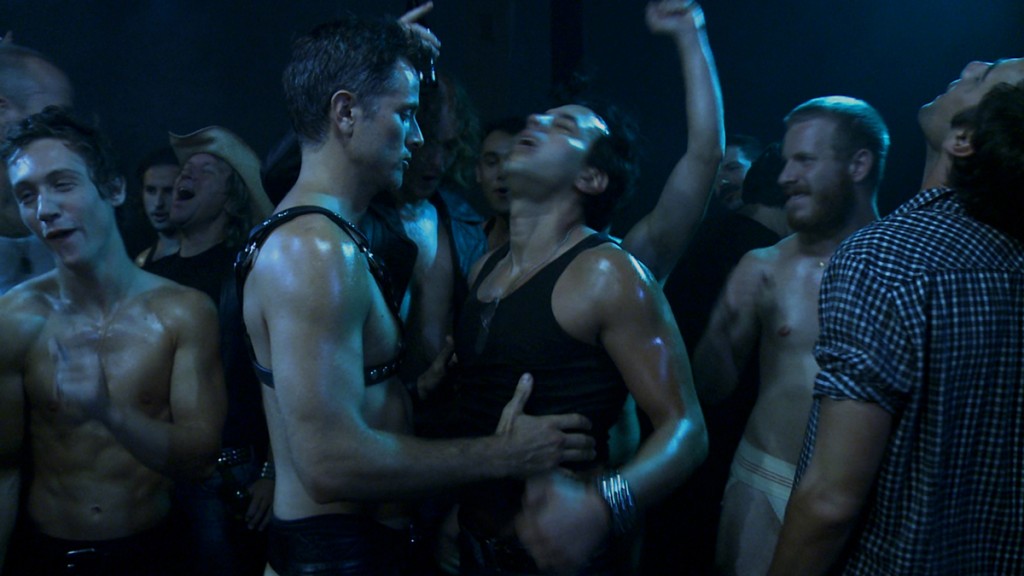 The amusing, but ultimately lacking, apocalyptic comedy This Is The End wasn’t the only film released this year which saw James Franco playing ‘James Franco’. Interior. Leather Bar., however, wears its reflexivity with far more sincerity in comparison to the former films parodic tendencies.

Franco originally approached director Travis Mathews a couple of years ago, after seeing his acclaimed debut I Want Your Love. His proposal was to make a film inspired by forty minutes of lost footage rumoured to be cut from the 1980 Friedkin movie Cruising due to homosexual explicitness – his only condition: that this new film must contain un-simulated gay sex (those who have seen I Want Your Love will understand why Franco choose Mathews). The film they finally created however is more complex in its execution than that initial conception would have you imagine.

Interior. Leather Bar. is an docufiction film, co-directed by (and starring) the pair, which depicts the shoot of a reimagined version of the notorious lost forty minutes of Cruising in the style of a behind-the-scenes documentary. The film’s cast also includes Val Lauren, Christian Patrick, Brenden Gregory, Brad Roberge, Colin Chavez and A.J. Goodrich, all of whom play themselves. 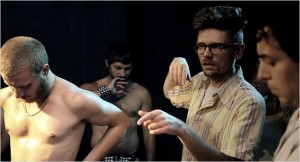 Val Lauren plays ‘Val Lauren’ playing ‘Al Pacino’ playing ‘Steve Burns’, with all those layers overlapping throughout the film. Lauren, who is shown reluctantly agreeing to take the lead in the film in the name of a long-standing artistic respect for his friend James Franco, is repeatedly forced to interrogate his own creative frontiers as un-simulated gay sex occurs all around him.

Only featuring about 10 minutes of the re-imagined Cruising footage, most of the film is rather an examination of the process of film-making itself, exploring issues such as the levels of comfort or discomfort of the actors in performing the material, the conflict between creative freedom and societal censorship, the shifting barriers between art and pornography.

The opening scene sees Lauren ask of the project “Are we going to manipulate it to make a certain point? Or are we just going to present it as what it is?” A sudden cut to the title card means that this (like so many of the films enquiries) is left hanging. It’s a key question that lingers throughout the film, particularly as it becomes apparent that the film-makers are, in a sense, controlling the content whilst simultaneously providing an insight of searing honesty.

By the end of the films fleeting sixty minutes the audience has an awful lot upon which to ruminate. Indeed, on paper it may seem that there are too many ideas for such a brief running time, but the film-makers have effectively tied these ideas to a central thesis, framing all these questions around Lauren’s journey through the shoot. And it’s a pretty rocky one.

Indeed, despite it being his sanction, at times it seems Franco himself doesn’t feel comfortable with the content of the shoot. But it is interesting to remember that this is all an act. A conversation half way through overtly lays out Franco’s desire to confront this discomfort, which, as it happens, is precisely the reason behind the shoot. At these points the film holds up a mirror to its audience and forces them to have a long hard think about their preconceptions of what ‘normal’ is.

And heteronormativity isn’t the only issue that’s interrogated here. Artistic taboos are addressed as Franco asks why sex is considered a shameful gratuity rather than a story-telling technique. The concept of celebrity is brought to the fore as many of the performers profess the only reason they signed on to the project was the appearance of Franco’s name.

There is a particularly interesting central contradiction that begins with a conversation about gay marriage and the increasing normalisation of the queer community, the erasure of the radicalness, the straightening out of kink. Both the film-makers agree that there’s a question to be asked about a people losing their identity to conformism, which raises an interesting issue of sexual equality vs. sexual identity.

And it’s not just the spoken musings that invite the audience to actively participate. The specific form of the film, an apparent fly-on-the-wall documentary following Val (which, thanks to Mathews’ prior documentary-making experience, initially seems totally genuine) offers the audience a window to this world, through which it’s almost impossible not to climb. This technique is far more effective in involving the audience than an overtly fictional construction would be, and it means that the viewing experience itself feels as intimate as the sex we see. In addition to this, a lot of the film is shot in close-up, which only heightens the sense of familiarity and confidence.

All this is epitomised in an early moment of what looks like test-footage, where Mathews’ can be heard asking a performer to look straight into the camera and pretend that he’s cruising a guy – of course, what he’s really getting the actor to do is cruise the audience.

This is a queer film-making in almost every way, full of kink and kaufmanesque ideas (at one point, Lauren sits in the parking lot, the script on his lap, and reads to himself: “Val sits in the parking lot, the script in his lap. He reads to himself.”). But, thankfully, none of this is merely there to impress the audience or sexually excite; Interior. Leather Bar. exists to stimulate the mind, not the libido. 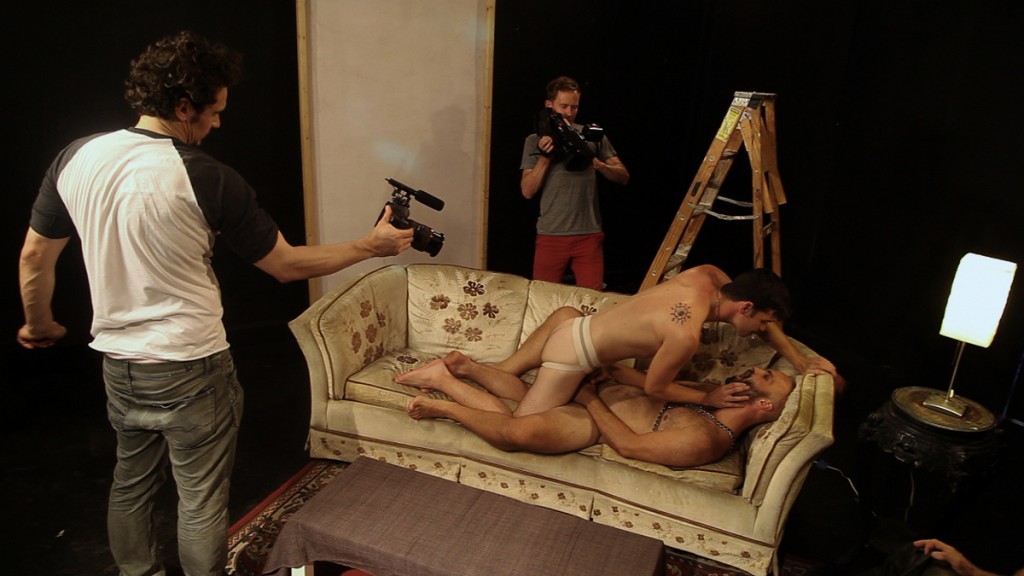