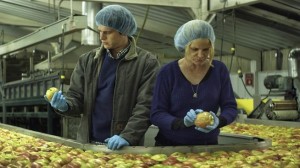 Kyle Patrick Alvarez’s adaptation of David Sedaris’ essay, C.O.G., is an intimate story of a man who is stuck between the world he knows so well and another filled with people completely unlike those he grew up around with beliefs that are far from his own. Jonathan Groff (Looking) confidently leads this tale as David, a college student who is constantly surrounded by books, always yearning for new knowledge about what he already knows. He is calm, quiet and charming but keeps how he feels close to his chest at all times.

But despite his thirst for the world around him, he lives a closed minded existence, comfortable and without a worry about where his next meal will be coming from. When he up and leaves this privileged life that he leads to go to Oregon, he finds himself working on an apple farm, where the only people that speak English are himself and the owner of the land. The audience are also aware that he has recently had a falling out with his mother after he calls her to say that he is safe and shouldn’t contact him until he possibly calls her again but there is really no other indication as to what their argument was about and what his life was really like before now.

Alvarez has expertly created an intelligent snapshot of an important moment in time for David; so many questions follow him through his 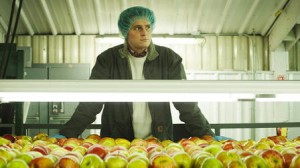 journey but something that constantly reoccurs is the question of his sexuality. But it must be made clear, this isn’t a tale of a guy realising he is gay or making sure those around him are okay with this, this is a much bigger and complex story about being caught between two separate beliefs and getting lost in the doctrine of both. From his work on the farm, he ends up in a nearby factory where he meets Curly (Corey Stoll), a fellow worker who seems to have a good run of the place. On the lower level, David’s colleagues are loud mouthed local women, who are clearly intimidated by his knowledge but at the same time, Alvarez interestingly raises the question about David’s issues with them as well – he understands they just aren’t on his level and finds himself with less and less time for them. As Curly and David grow closer, David is promoted away from the women to a part of the factory where he has to decide between the special apples and the extra special apples.

In the local town, David meets Jon (an incredibly talented Denis O’Hare), a preacher who talk about ‘C.O.G.’ but doesn’t tell David anymore because he sees that there isn’t the belief just yet but when a night between Curly and David turns horribly uncomfortable and surprising, David runs away and finds refuge with the faithful and ever giving Jon. Together they talk about faith, religion and helping your fellow Christian, but when Jon later realises that David is gay, he turns nasty and turns him away. 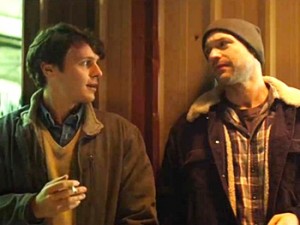 C.O.G. is funny and important; David goes from one side of the argument to the other and sees how people can hurt him regardless of what he believes. When he thinks his knowledge and science is key, he finds himself in trouble with Curly but when he starts to believe in religion and accepts being indoctrinated into the Church, he suddenly learns about the hypocrisy and hatefulness of some of those followers as well. What David has to learn is to believe in his world, regardless of what those around him tell him and that he will gradually find shelter in being comfortable in his own skin. Despite being deep and meaningful, there is also some great humour in the film – the shock moment that David walks into Curly’s room and sees a wall filled with dildos is a laugh out loud moment, which the audience certainly aren’t expecting but also smaller moments and intricacies of Alvarez’s filmmaking make the film an easy and enjoyable watch.

Groff does a splendid job as David, he plays the character with such charm and innocence that the audience actually want to see a good outcome to his rocky journey. Groff in particular has a way of playing such wonderful chemistry with the entire cast, from the humour to the drama and manages to command the emotions of the audience in a subtle and delicate way.

Gripping and enjoyable, light and dark, touching and delicate, C.O.G. is a film that demands discussion and highlights the potential hypocrisy in every belief and thought system.