“Gay ain’t even an option,” says Jason (Russell Tovey), resignation heavy in his voice as he faces his failed attempt to counter rumours heavy in the press. Jason is a footballer, his celebrity suggested as being on the level of a Frank Lampard or a Wayne Rooney: the lights of tabloid scrutiny so bright they burn into every corner of his life. John Donnelly’s play The Pass attempts to imagine the suffocating effects of football’s deeply masculine and homophobic environment in three acts, using Jason as its damaged, wild and tragic case study.

In transferring The Pass to the screen for the opening film of the BFI’s 30th LGBTQ+ film festival, now titled Flare, director Ben A. Williams attempts to eschew the theatrical enclosures of the three sets, three acts structure by keeping almost suffocatingly close to his actors, and to some extent, this psychological pressure works. Tovey’s performance is daringly full-throttle, a deadened blackness in his eyes but a terrifying mania to his expressions in the final act where his ex-teammate Ade (Arinze Kene) and hotel bellboy Harry (Hollyoaks’ Nico Mirallegro) are drawn into Jason’s dangerous self-sabotage. Even in the first act, an engaging opening in a Bulgarian hotel room as Jason and Ade prepare for what will prove their make-or-break match, Tovey’s erratic energy is energisingly unpredictable. 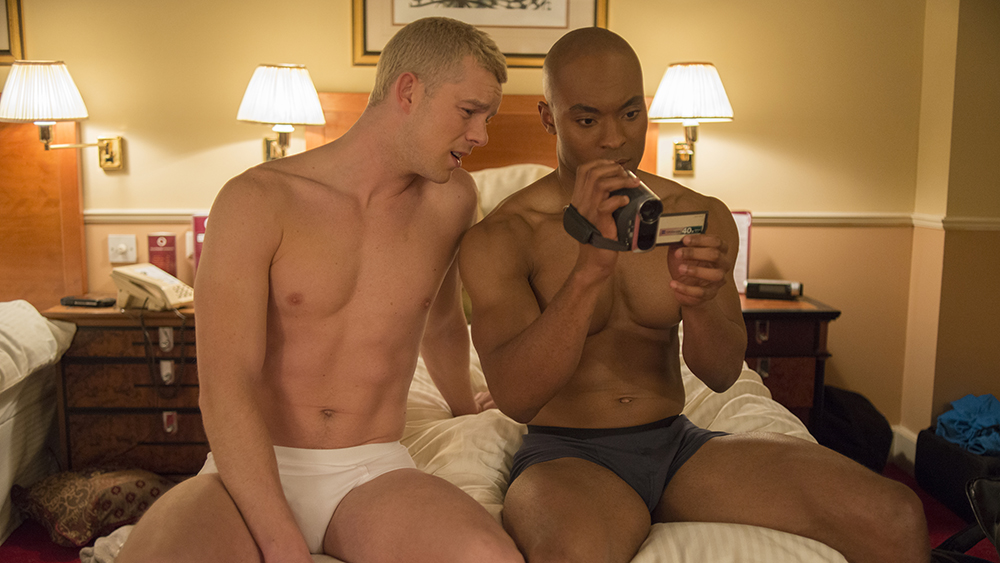 The double meaning of the film’s title is rather blatantly shoehorned into the emotional dynamics of the final act, and without the physical rush of the moment to give this a visceral kick, it feels awkwardly worked in. In many ways, The Pass feels like it’s stuck in its own head, consumed with delving in and out of Jason’s head as the other character in the scene pokes at his fragile masculine bravado. Initially, we seem to be at an intersection of class, religion and sexuality, Jason and Ade’s differences already implying their regrettably divergent career paths. But the second act drops Ade and places Jason’s crisis as the narrative’s sole focus, and it finds less to say in its fantasy unveiling of a closeted megastar the press have long imagined.

It is a rare film that really probes the precarious performance of masculinity that Jason, at least, keeps up on a daily basis, and for that, The Pass must be valued. The more prurient crowd may find much mileage in the opening act’s insistence on keeping the two leads in the underwear – an image the film ultimately finds a more emotive use for. The film pierces right to the heart of the most notorious segment of the gay male community, with Jason’s fear of succumbing to stereotypes and of blind public judgment reflecting the crippling masc-for-masc snobbery so frequently seen and derided. This fearlessness gives The Pass a distinctive quality, and while it may be limited, this lively adaptation make it a valuable film to be leading the Flare festival.