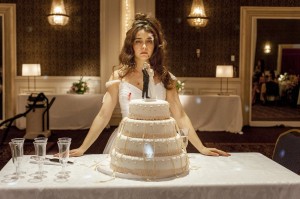 As individual short films, Damián Szifrón’s Wild Tales are brilliant but as a collection they are a revelation – uniquely crafted triumphs with a thematic connection, which goes down to the depths of the human psyche; revenge and tragedy. But by no means of the imagination is it doom and gloom in these stories but instead the darkest, blackest humour imaginable. Wild Tales is an incredibly powerful and compelling example of the kind of cinema that audiences around the world could be expecting from Argentina and whilst it opens up the idea of a short film becoming something more accessible for cinema-going audiences, it never runs away from the idea of creating brilliant self contained units of story.

Produced by Pedro and Agustín Almodóvar (as El Deseo), Wild Tales spins a yarn right from the very start and only builds in intensity, spiralling towards the end credits. Stories of plane crashes, murderess waitresses, crazy car chases, blown up car lots, hit and runs and finally, an unhinged bride makes up the individual stories of Wild Tales and whilst each has its own cast of characters and tales to tell, they are connected through the idea of revenge and violence. Szifrón is careful to never allow the stories to become gratuitous or the characters to become grotesque, always just managing to balance the line between satire and stupidity.

Each of the stories is determined to discover some psychological state, whether it’s the lead characters (or someone off screen as the case may be), there is always some for of dissection, discussion or illustration of what is going on inside the characters heads. It’s almost as if Szifrón’s stories are ideal illustrations of Freud’s theory of the Id, Ego and Superego. In this theory, the Id is the impulsive part of ourselves, which responds directly to our instincts, requiring immediate pleasure and unaffected by logic in the real world. Certainly in most these stories, the characters find themselves fighting internally; do they find immediate pleasure, solve the issue right away or do they put down their emotions and try and settle into society and it’s rules?

One of the best stories is “The Strongest”, which sees a seemingly random car chase through the desert between two men. Both let pride and 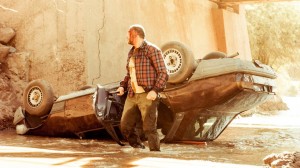 their own insecurities get in the way of common sense and whilst the saying goes, ‘Turn the other cheek,’ neither of these men is willing to admit they are wrong. Their own arrogance is their greatest weakness and ultimately their downfall. As Diego speeds through the desert roads in his flashy new sports car, another driver, Mario tries to block him on the road and they end up insulting each other. As Diego leaves Mario behind in the dust, he ends up getting a flat tyre and pulls over. Mario catches up and the two begin a fight to the death. The greatest irony is the ending, which sees the police calling their fight a ‘crime of passion’ as their burnt bodies hold each other as if lovers.

Another story, “Until Death Do Us Part”, takes place at the wedding of Romina to Ariel. When she discovers after their ceremony that he has been cheating on her with another woman that has attended their wedding, she loses all inhibition and allows her darkest desires to come to life. She goes to the roof and has sex with a chef who says something nice to her. Ariel finds the pair together and Romina explains that she is going to have sex with any man that looks in her direction, she will learn to act as the loving wife and if he ever leaves her, she will take him for all he is worth. Érica Rivas as Romina is like a spark going off repeatedly on screen, lighting up and shredding the scenes as she goes through them. This monologue in particular is brilliant – for the first and only time in the entire collection of films, someone says how they feel and what they are going to do to put it right in their heads. Later, a fight in the main hall between Romina and pretty much every other guest (including the woman Ariel has been sleeping with and Ariel’s mother) explode on screen, like a never ending array of colourful and exciting fireworks. She is revenge personified.

The performances that Szifrón is able to get from his large cast is just one of the many elements that makes Wild Tales such brilliant filmmaking. From Rivas to Ricardo Darín (in “Little Bomb”) to Oscar Martínez (in “The Proposal”) and Leonardo Sbaraglia (in “The Strongest”), each actor knows exactly what is required to bring these outrageous characters to life and they each move across the screen in such brilliant relation, one to the other. Whilst Wild Tales is a book of different stories, when you finally do open it and jump in, you realise that it is so much more and so very, very good.