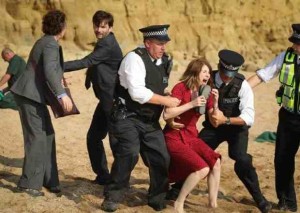 British teledrama has another scrape of the long-empty creative barrel with dramatic dregs-heap Broadchurch, the latest in a long line of rock-bottom miserablist productions that are over-funded and offensively marketed.

As its tagline (“A Town Wrapped in Secrets”) and its premise (small town rocked by murder!) suggest, this new eight-part series sails to shore brimming full with associations to early-’90s cult classic Twin Peaks, which began with an otherwise quaint town reeled by the discovery of its high-school prom-queen Laura Palmer being found dead, wrapped in plastic. Let’s not waste any time in shattering any other unfavourable comparisons, though. Whereas Twin Peaks had the decency to deal with communal, adolescent and parental trauma (dormant or otherwise) in a lateral fashion that invited the weird and wonderful, Broadchurch is storytelling at its most literal, and therefore its most humourless, its most charmless. There is no fish in its percolator.

David Tennant is Hardy, a Scottish copper whose arrival in an incestuous seaside town on England’s southern coast coincides with the discovery of an eleven-year-old schoolboy’s body. Hardy’s new partner Miller (Olivia Colman) recognises the lad as her own son’s school pal. The pair inform his family, do the rounds with potential witnesses and struggle to keep details under wraps from parasitic careerist journalists who leak info via Twitter. The newsagent (David Bradley) who employed the victim’s paper-round is standoffish; Pauline Quirke, an as-yet wordless log-lady in the waiting, solemnly drinks (damn fine?) coffee from the margins, while the victim’s sixteen-year-old sister hitches a motorbike ride from her secret older boyfriend to plant a teddy bear at the shoreline crime scene.

So far, then, so mysterious. Only it isn’t, since all the intrigue is communicated with all the subtlety and predictability of a policeman’s truncheon. Some narrative/conceptual/emotive conveniences, all laughable to varying degrees: would-be upstart journo Olly’s unthinking press-leak is primed by a rejection letter from The Daily Mail (“I’ve applied to all of them now!”); on his way to identify his son’s corpse, Mark Latimer, red-herring chief suspect-to-be (he was “out plumbing” (or – gasp – having an affair!?) the night his son went walkies) is accosted by an oblivious doctor who somehow doesn’t read the grim situation and hounds him to sign a petition; Vicky McClure, a fine actress, shows up in the final twenty or so minutes as a national media hack who may or may not know Tennant’s Hardy personally, but who makes explicit reference to “Sandbrook”, one of his past muck-ups, thereby repeating words spoken earlier by Hardy’s own superior (over a 99 ice-cream On the Way to Nowhere). Next week, expect more characters to know each other in more ways than they’re letting on.

Needless to say, nobody acts in this way; if only life was so conveniently dysfunctional. For too long now, British drama, whether as a result of budgetary constraints, technical ineptitude or intellectual/creative bankruptcy, has dealt us stock images and dramatic stereotypes – to the point where Ben Lawrence’s preview in The Telegraph can merely refer to Quirke’s character as “a misanthrope” (!). Broadchurch continues a frankly egregious trend in audiovisual storytelling, whereby actors are blocked to walk through a frame heading… where, exactly? before one walks off as if the scene were a stage, leaving the other alone to Ponder Cutting Exit Line. On a more obvious and more immediate level, though, Broadchurch is tackily filmed: the demerits of appreciably shaky camerawork, focus-pulls and sickly lighting are all heightened by a high dependence upon slow-motion, particularly for those many Ambiguous Reaction Shots Complemented By Anonymous Ambient Drone Music.

Awash with mediocrity and a tiring sense of routine, Chris Chibnall‘s latest TV drama boasts a marketably handsome cast, none of whom are given anything to work with. Tennant, after annoying us with autocues in Virgin Media adverts, dons a fashionable beard to symbolise his character’s lingering, burdenful, alluded-to past shabbiness. Colman tends to lift every scene she’s in, in a role that doesn’t so far require much of her. But to what end have these talents been employed? To cut an already too-long response to this derivative shite short: not much at all.