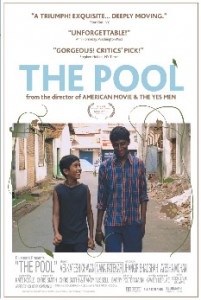 Vie d’une piscine… Chris Smith‘s most recent film credit is as one of two producers on last year’s The Jeffrey Dahmer Files, a film whose doc-drama hybrid was perhaps uneasily handled by director Christopher James Thompson, but whose synthetic conceit was more or less in line with Smith’s preceding body of work as director, which has included fictional features as well as documentaries. Equally at home making either, Smith began his directorial career in 1996 with American Job, a narrative film that depicted the innately dispiriting nature of minimum wage labour in the United States, which was followed by several highly regarded independent documentaries, including American Movie (1999), Home Movie (2001) and The Yes Men (2003) (he also directed episodes of US television show Split Screen). All three of these documentaries chimed with one another and also continued themes first set out in the 1996 film.

Between The Yes Men and his most recent documentary Collapse (2009), which focuses on ex-policeman Michael Rupper and his self-published prediction of the 2008 financial collapse, Smith returned to fictional filmmaking with The Pool (2007). Not to be confused with its German-made 2001 namesake (a bra-and-panties horror starring Isla Fisher and James McAvoy), The Pool is a minor masterpiece, released on DVD here by Blue Dolphin Films after lying dormant for six years following its premiere at the 2007 Sundance Film Festival. Reasons for the wait is anybody’s guess, but the film’s belated distribution (it had a limited theatrical run in London last November) is more than welcome.

Set and shot in Panjim in Goa, India, The Pool stars Venkatesh Chavan as eighteen-year-old Venkatesh, who has travelled from Karnataka to work as a busboy in a city-centre hotel. With his eleven-year-old pal Jhangir (Jhangir Badshah), Venkatesh spends his short work breaks spying on the upkept but apparently empty home adjoining the hotel. When the home’s occupants – its owner and his daughter – return, Venkatesh and Jhangir’s curiosity is heightened. Where are they from: Bombay? Delhi? “They must be really rich to have houses they don’t live in.” In a plan to gain access to the home’s untouched, exotically blue swimming pool, Venkatesh wins the trust of the home’s owner, Nana (Nana Paketar), under the pretense of a garden-centre employee. Though his scheme is found out, Venkatesh is employed by Nana to help with domestic tasks. Gradually, however, the boy becomes enchanted by Nana’s daughter, Ayesha (Ayesha Mohan), who spends her days in solitude, reading literature that “screws with your head”. A friendship blossoms; at the same time, Nana begins to advise Venkatesh that he has enough potential to attend school. Bonds form, as do tensions.

Smith’s film has an observational rhythm and a patient and pleasant tone. Often funny and even occasionally lyrical, it does not shy away from the realities affecting ordinary Indian people, such as urban and rural poverty, poor wages, literacy and so on. (Originally adapted from a Randy Russell story and set in Iowa, Smith transferred the narrative to Panjim, where he had visited while working on a previous film.) The film’s literal juxtaposition, between a hotel that exploits its disposable workforce of busboys and a plush home only seasonally lived in, provides a symbolic framework that is never milked beyond necessity. References to India’s colonised past – to British rule as well as Portuguese – “they’re all from America,” remarks Jhangir – are explicit without being dwelled upon. While budgetary constraints limited cast size – whereby the four principal characters live at a seeming remove from any social commitments – the actors are all impeccable, lending plausibility and a sense of lived history to their respective roles. The range of experience before the camera is significant: as Nana, Paketar brought a veteran’s CV working in Bollywood, while to the role of Jhangir, Badshah brought his own experiences working as a hotel janitor.

The Pool‘s highly effective naturalism is achieved through a confident mixture of improvisation and planning (editing occurred alongside shooting). Smith’s cinematography is quietly stunning: the handheld, 35mm textures draw the colour out of everyday Panjim life and provides counter-arguments both to the 3D spectacle on display in Life of Pi as well as the flashy star power imposed upon The Best Exotic Marigold Hotel. This intelligent, respectful and understated narrative approach is best exemplified by the brief moment in which Nana makes a confession to Venkatesh regarding his eponymous swimming pool, a staggering revelation given real poignancy by the unspoken implications it subtly suggests.

‘The Pool’ is available on DVD from Monday, 25 February.