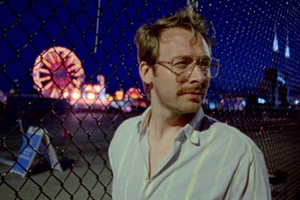 Jeffrey Dahmer was arrested in 1991 when a severed Afro-American head was found in a fridge in his Milwaukee apartment. Thereafter, forensic investigators found human remains and evidence of torture, necrophilia and cannibalism. Dahmer was consequently charged for the rape, murder and dismemberment of 17 men; in 1994, he was murdered by a fellow inmate in prison.

Chris James Thompson seems to have approached The Jeffrey Dahmer Files, a documentary containing fictionalised vignettes, with the assumption that its material is already known to viewers. His three interviewees – Detective Patrick Kennedy, Milwaukee Medical Examiner Jeffrey Jentzen and Dahmer’s neighbour at the time of his arrest, Pamela Bass – are never traditionally named in-film – via, for instance, on-screen text – while Dahmer himself is referred to as some abstract “he”. The gruesome details are less illustrative than expository here: they’re our window into the film.

For a work that clocks in at a slim 75 minutes, brevity and clarity are essential. Thompson’s approach is peculiar, then, allowing the shape of his material to form in an elusory fashion that recalls Gus Van Sant’s Elephant (2003) and Last Days (2005). More problematic is his decision to weave short, fictional sketches into his narrative. Espousing a minimalist indie chic, these non-scenes show Dahmer (Andrew Swant) visit pet stores, fairgrounds and supermarkets, make purchases of containers and multiple bottles of bleach, check in at hotels, enter and exit his room (the camera lingers to capture both in one take), etc.

Embarking upon such imagined scenarios might amount to an ethical problem, but in the more immediate sense Thompson’s indulgences are narrative and tonal distractions. This is a shame, considering the strength of the interviews. Whether due to a lack of trust in the talking heads alone or because of difficulties in production (was the film originally conceived in two halves?), the fictionalised scenarios that punctuate The Jeffrey Dahmer Files sit uneasily in the film as a whole.

‘The Jeffrey Dahmer Files’ was part of the London Film Festival’s ‘Cult’ strand.