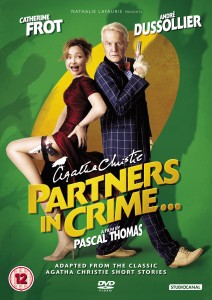 Partners in Crime (Associés contre le crime) was released in its native France in August last year, but barely made a UK theatrical run in late-December. Delighting in its own eccentricities and offbeat charms, the film is named after Agatha Christie‘s 1929 collection of short stories featuring the author’s recurrent detective couple, Tommy (here Bélisaire) and Prudence Beresford, and is director Pascal Thomas‘s third film featuring Christie’s married duo, following 2005’s By the Prick of My Thumbs (Mon petit doigt m’a dit…) and 2008’s Crime is Our Punishment (Le crime est notre affaire). It is released on DVD in the UK by StudioCanal.

Like the earlier films (Thomas also directed an adaptation of Christie’s 1944 novel, Towards Zero, which was released in 2007), the Beresfords are played here by Catherine Frot and André Dussollier, two veterans of French cinema whose combined body of work amounts to nearly 230 credits across films and television. Both their chemistry and respective comic talents ground what might otherwise have been a throwaway adaptation of much-admired pulp; Thomas, it is clear, wishes to keep things lively and colourful, and his and co-scriptwriters Clémence de Biéville and Nathalie Lafaurie‘s approach to the source material – to be exact, “The Case of the Missing Lady”, the fifth of fourteen shorts that comprise Christie’s collection – is refreshingly irreverent and, even, peculiarly French.

We meet the Beresfords, a pair of married retirees, during a tour that marks the release of Bélisaire’s latest autobiography. Barely able to conceal dismay at her absence from the book, Prudence – who refers to herself as the “do-nothing wife of a mundane writer” – retreats to the countryside before starting up a sleuthing agency, whereat she is visited by one James van Luydekerke (Vania Plemiannikov), whose wealthy fiancée Ludmilla Sakhaline has gone missing at an exclusive health spa. Investigating the latter, Prudence stumbles upon a conspiracy involving a mysterious egg that reverses (but also accelerates) the ageing process.

Sparsely plotted, Partners in Crime is a casual romp through several running motifs, including marital fallout, beauty, identity and ageing. At its centre, Prudence and Bélisaire’s gentle bickering is the pivot around which the film turns: “How was I?” asks Bélisaire after the book launch with which the film begins; “Stunning,” replies Prudence, only to correct herself: “Oafish.” Later, after she has elicited his assistance at the health spa, Prudence tells her husband that she “is the only one blind enough to think you’re handsome”. 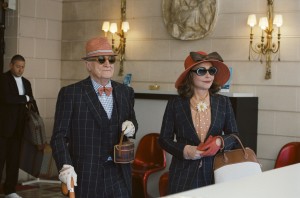 Never a film weighed down by gender politics, though, the jealousy, hurt and competition of an enduring married life are played for harmless fun, such as when Prudence returns home to find Bélisaire blind drunk, to which she responds by downing a whole tumbler of whisky herself, which is followed by an intoxicated reconciliatory dance with her partner. In fact, marriage here is portrayed as a colourful adventure of ceaseless discovery: annoyed by her inability to recall vital information at a crucial moment, Prudence orders Bélisaire to spank her (“it stimulates my memory!”) harder and harder until she is able to reel off a list of facts hitherto eluding her.

Packaged with love-it-or-hate-it French whimsy, other touches delight: at the spa, folk are belying all kinds of ages, not least of all Marie van Dinh (Linh Dan Pham), the 82-year-old employee with impeccably youthful looks who tips the protagonists off as to where they can find their next clue. When the Beresfords assume disguises (as Monsieur and Madame Wilderbug) in order to infiltrate the suspect spa, meanwhile, Prudence asks for a tit-job while Bélisaire receives advice regarding the possibility of having a Cary Grant dimple planted onto his chin. When things inevitably go awry for the pair and Prudence returns to base – where she finds time to spruce up – Bélisaire must improvise an escape plan, which he describes to his wife in coded acrostic over the telephone; making said escape, he stabs a guard only for the latter to literally deflate, like a balloon…

Sending what semblance it had to a tightly structured narrative up in the air, Partners in Crime indulges finally in a lengthy appendix whose narrative and visual logic assume a surrealism that some might think is a stretch – thereby missing the light-hearted manner with which “story” itself has previously been toyed.

‘Partners in Crime’ is released on DVD on Monday 7 January.