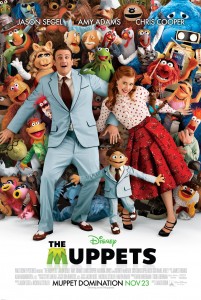 It has been 12 years since the last theatrical outing for Jim Hensons’ Muppets, last seen in the 1999 ‘Muppets From Space’ but last year they returned (via Walt Disney) for a big screen musical muppet film starring Jason Segel, Amy Adams and Chris Cooper (and not forgetting the long list of cameos, some recognisable and others questionable).

‘The Muppets’ received the most brilliant advertising campaign leading up to it’s release, making fake trailers based on other films at the time of release (inc. ‘The Green Hornet’ and a brilliant ‘The Girl with the Dragon Tattoo’ trailer). I had wanted to see this film in the cinema, but had never found the time, so when the DVD landed on my doorstep, I was more than happy to settle down for some Muppet magic that I had enjoyed as a child. Now, this latest outing does not pretend to be anything other than a tribute to the Muppets, referencing several times that they are no longer popular and they are out of touch with the popular culture of today (as seen brilliantly in a scene with a television executive, played by the underused Rashida Jones).

The film itself, has a simple enough premise, which is carried by the return of these iconic characters, ranging from Kermit and Piggy to Animal and Gonzo to The Swedish Chef and Fozzie Bear. The Muppets’ studios in Los Angeles is being taken over by evil oil barren, Tex Richman (portrayed by Cooper, who seems a little outside of his comfort zone), who pretends to want to make the studios into a museum for the immortal characters, but instead he would rather destroy the studios and dig for the oil underneath. There is one condition however, if the Muppets can make $10 million before the end of the lease, they can repurchase the theatre for themselves. Hence, time for a montage where NEW MUPPET, Walter (along with his ‘brother’, Gary played by Segel and his girlfriend, Mary, played by Adams) travel across the United States with the help of Kermit to collect the rest of his old friends. 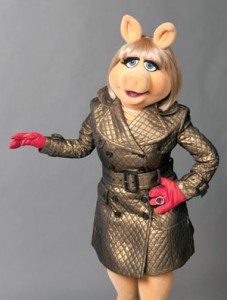 Once they are mostly together, they realise one of them is missing. Kermit is sure this isn’t the case, but the audience who are aware of the characters know exactly who they are talking about. Time to go to Paris and collect the utterly brilliant, Miss Piggy.On arriving in Paris, our characters find that Piggy is an editor at Vogue but before getting to her, they must go through her secretary (played by the gorgeous Emily Blunt, in a ‘The Devil Wears Prada’ homage). They do not succeed at first, but what do they teach us, try, try, again… This time as Muppet Man.

One of the tensions throughout the entire film (without this sounding deep) is between the differences between being a real muppet, and being a real man. This is caught perfectly in the song “Man or Muppet” sung by Walter and Gary, which did in fact win an Academy Award for Best Original Song. Gary has spent most of this trip ignoring Mary, and this begs the question about whether he is a real man who is happy to leave his ‘brother’ alone in the world to find his way. Ironically, the same question is asked by Walter who wonders if he is good enough to join the Muppets or whether he is too much like a human. One of the joys of the film is that you do truly forget you are watching puppets, so many of the characters are given human characteristics, which they pull off brilliantly (see Animal in rehab) and therefore the differences between the two are really growing thinner and thinner. 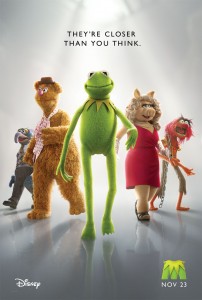 Another joy of ‘The Muppets’ are the metatextual references, the blatant homage to what they used to be. The start of the film shows us a collection of old clips from the original Henson series, and it seems to be recalling a world where things were better and easier. This utopia is carried through the start of the film in the present day, where Smalltown (the home of our characters) is presented as a 1950’s family melodrama (see Douglas Sirk) setting with vivid colours, beautiful landscapes and excessive imagery. This is carried into Gary and Mary, who are both happy-go-lucky characters with little vision past the worlds that they come from but even that can sometimes be delightful (for example the children aren’t excited it’s Spring Break but would rather carry on being taught by Mary), and at the end of the day, this is meant to be a children’s film.

Bearing that in mind, although this is made for children everywhere, it also satisfies the adults just as much (especially if you were fan the first time around). Seeing all the old gang on screen again is brilliant enough, but the comments made throughout the film about this being a film, about whether the audience are getting bored and the sometimes blatant direct mode of address to the audience make the film so much more than it would have been otherwise. As adults understanding that the writers (Segel and Nichols Stoller) are commenting upon the filmic process, it’s as if we are being let into a small secret that the children watching (probably) wouldn’t get. But perhaps, I’m reading too far into it and in our postmodern world, that is simply assumed to be the case.

‘The Muppets’ also has it’s fair share of cameos, some of which aren’t as great as we would have hoped. 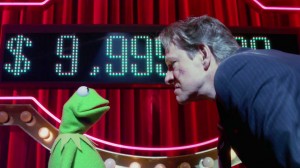 In their heyday, the show would attract the likes of Elton John, Steve Martin and even Orson Welles but today, they stretched to Selena Gomez and Jack Black. Annoyingly, Black receives the most air time (as an A-lister?) and yet some of the other names that appear are far more impressive (see Blunt, Whoopi Goldberg, Alan Arkin, Dave Ghrol, Mickey Rooney etc). But despite all that, they still made me laugh and I suppose that is what we learn from this film, that The Muppets can provide us the third greatest gift… laughter.

The music in the film is a brilliant accompaniment, with the musical moments stepping outside of the film as inner monologues of the characters (before stepping back into the film and making the characters look stupid) and they remind us that the film is meant to be having fun. Furthermore, the film is not without it’s contemporary issues such as economics and the oil industry (obviously portrayed in a child friendly, non judgemental way), but it’s still major that money is an important aspect of the film and I was cheering along, hoping The Muppets would raise those funds.

The DVD comes out today, 11th June and has a brilliant blooper reel special feature which shows us that the makers have gone that little step further for our entertainment.

I completely recommend ‘The Muppets’ whatever your age, it’s funny, happy and brings back some brilliant memories about the old days.