The Piggy With the Froggy Tattoo

In a new trailer for the forthcoming The Muppets movie starring Amy Adams and Jason Segel, audiences are given yet another parody trailer; this time The Girl With The Dragon Tattoo.

Earlier this year those same audiences were treated to a spoof romantic film trailer entitled ‘Green With Envy’ starring Amy Adams, Jason Segel and Chris Cooper. This was revealed to be the first in a series of parody trailers for the eagerly awaited The Muppets movie, the first cinematic outing for Kermit the Frog and Miss Piggy and co since 1999’s Muppets from Space.

Since then additional spoof trailers were released of The Hangover Part II called ‘The Fuzzy Pack’ and the Green Lantern parody entitled ‘Being Green’. Today another of these brilliant trailers (along with a hysterical take on the controversial poster) was released, entitled ‘The Pig With The Foggy Tattoo’, based upon David Fincher’s forthcoming English remake of The Girl With The Dragon Tattoo starring Daniel Craig and Rooney Mara.

The preview shows some imitated scenes of the “Dragon Tattoo” original teaser, including the background music. “We couldn’t get the rights to the real song, so we had some dude write this one,” so read a tagline in the video. It also gives a glimpse at the cameos like Neil Patrick Harris, Sarah Silverman and Rico Rodriguez.

The poster, which I mentioned before, sees Kermit and Miss Piggy imitating the pose of Daniel Craig and the nude Rooney Mara in the original poster with the release date across the middle. 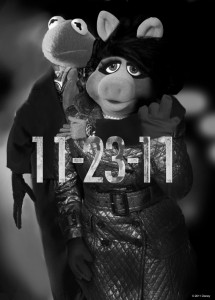 The Muppets follows a man named Gary, his girlfriend Mary and his life-long brown puppet best friend Walter who must round up and convince the now retired entertainers from the original Muppet Show to help save the famous television studio that the original variety series was filmed in. Villainous Tex Richman is due to take over the property, and wants to destroy the theatre and drill for oil underneath.

The film is directed by James Bobin (co-creator of Flight of the Conchords) and stars Jason Segel, Amy Adams, Chris Cooper, Rashida Jones and Emily Blunt.