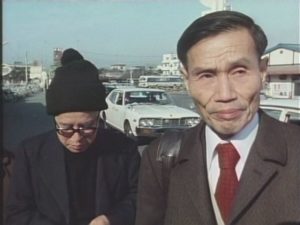 The Legacy of Ashes. A noble title. Used by the writer Tim Weiner for his book about the CIA. It could of been just as aptly used by Kazuo Hara (the director of THE EMPERORS NAKED ARMY MARCHES ON) for his film about Japan, its war and the single man campaigner Okuzaki. He is unlike anyone in film history. A social justice campaigner, searching for a voice. He fought alongside others in the war to end all war. Many of his compatriots were killed. Soliders that fought and died for Japan during the Second World War often had horrible stories of punishment and war crimes. However some were murdered for other reasons. As we roll on, THE EMPERORS NAKED ARMY MARCHES ON establishes a system unlike any other in human monsterousness. Cannibalism, superiors abusing power and the lies of an empire that shamefully slaughtered without fear or without remorse. 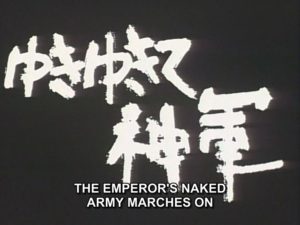 Okuzaki blames Hirohito. And well he should. The emperor who lead the country to the brink of devestation has total culpability. But no one wants to hear this. He is stood up to by very staunch opposition. Peopled with those that tried at all costs to hide from the truths whispered and mouthed in rooms away from ears. Okuzaki rams down objections. Stnds up to the police. Drives in a graffitti spewn car. Shouts to the end and still wants more. Erroll Morris loved this film. Top 5 he said. Rightly so. Its a bold sucker punch of truth. Veritie if you will. It never quite gets more real than when a fight erupts over a lie. A hidden word. Okuzaki attacks a former captain and tells him ‘Respect…tell the truth.’ With this, film was made masterful.  THE EMPERORS NAKED ARMY MARCHES ON is really about the push and pull of memory. How we are the bastions of its dilution and distilation. For good or for bad. We tell ourselves what is right and what happened. The problem is we all have an Okuzaki character in our minds, souls, ears… The power of this film is to make it seem that finally, this is a justifiable thing for its good to tell the truth. 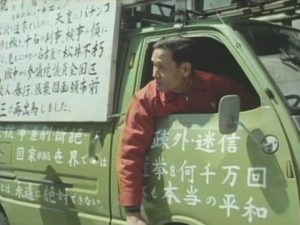 So the HD master is a much, much. That is to say the original was pretty good and so the Blu Ray feels less dazzling than expected IMO. Please dont scream and shout about how I am wrong. An opinion is like an arsehole. we all have one and they are all…well you know.

No Booklet but the  new filmed interview with director Kazuo Hara is very interesting (if a little shorter then I wanted, give me 3 hours please). The take away is that challenging the expected Japanese response to the film and what he got, is enriching and emotionally resonant. 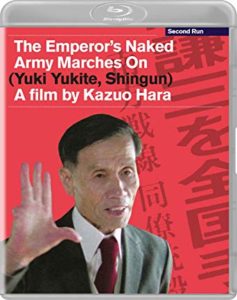