Everything runs in the undercurrents of Lisa Aschan’s impressive, understated debut. Charting the course of a tempestuous relationship between two Swedish teens in patient, subtle strokes, Aschan crafts an assured inversion of the coming of age film by observing the darkness that can lie beneath teenage existence.

Using equestrian vaulting as a symbol for the competitiveness and jealousy often inherent to young female relationships, Aschan explores the struggle between her two conflicted teens, in sport and in life. Emma (Mathilda Paradeiser) is new to the sport, a peculiar fusion of gymnastics and horse riding which involves balancing tentatively on a circling horse,  an exercise in strength, control and grace, hence its metaphorical value to the line Aschan is pursuing with her narrative.Cassandra (Linda Molin) is more experienced, and though instantly friends, the competitiveness between the two is immediately apparent and only grows in intensity through the film.

Though ultimately unexpectedly chaste, there are sexual undertones to every aspect of the girl’s relationship, and the sexual, promised and denied, becomes the ultimate tool of power in the girl’s battling.  In the equestrian horseplay, gymnastic stretch routines and swimming pool hangouts, sex is suggested, pulsating under the surface of their interactions, constantly threatening to overflow. Arch your back. Give me your hand. Lets take the plunge together.

These sexual suggestions become games in their own right. When Emma all but rejects Cassandra by accepting the sexual come ons of a local boy they are both toying with, Cassandra one-ups her by inviting the boy to a threesome before stealing his trousers, humiliating him and accusing him of rape, an astounding powerplay that overcomes both sexes in the game of lust. Their struggle is more tender too, Cassandra holding back Emma’s hair as she vomits after the two have been drinking together, and petting her as they lie in bed together, only for Emma to win this contest of wills by ultimately rejecting her advances.

Aschan matches the subterranean desires and unspoken struggles of the narrative with a minimalist, searching visual style. She Monkeys is drawn with a formal rigidity, all static camera compositions and pronounced lengthy takes. Pointedly serene landscapes run parallel to the violence that runs beneath the girl’s relationship, every shot is a thing of carefully constructed beauty.

Additionally, She Monkeys includes a subplot that is arguably as strong as the film’s main one, and certainly more uncomfortably 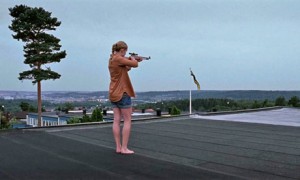 probing. Emma’s younger sister, played remarkably by eight year old Isabella Lindquist, has internal struggles as great as her older sister. She seems pained by an early onset of pubescent concerns, constantly yearning to be and act older, and more aggressively sexual than she has any right act at an age so tender. It makes for difficult viewing, but its an astute topic to address, looking at the uncomfortable middle period between pre-pubescence and adolescence, and how the line between the two, especially in girls, is not so clear cut. Lindquist is entirely believable, her performance incredibly nuanced and subtle for an actress so young, and the scenes with her that run alongside Emma and Cassandra’s rifts are important examinations, rather than throwaway padding.

Aschan’s film is somehow simultaneously tender and violent, warm and cold. Whilst low key and reserved, Aschan is confident in the quality of her material and the strength of her young actresses. A deep examination of teenage discomforts, of the confusion and conflict of that age, and a very assured, mature debut that signals a promising career ahead for the young Swedish director.