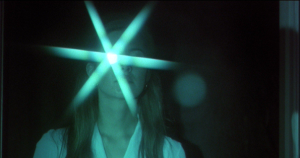 A horror classic and original ‘video nasty’ Ulli Lommel’s tale of a possessed mirror, gets a new uncut outing and is well worth revisiting. If only for the floating car death scene. When an evil madman sets out on a killing spree, he wasn’t expecting to be trapped inside a mirror. Now years later, the mirror is placed inside a house and accidentally breaks. This allows him to escape and he is free to hunt for more victims.  When a group of hapless teen types turn up, he is ready to slice and dice them apart. 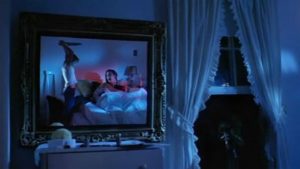 Cant say that this wasn’t a well worthy investment.  As a major fan of this slasher classic, it is always a pleasure to revisit. Its very abstract in places, absurd in others, surreal and sardonic in even more. Taking as its cue the then trend for possessed things, then mixing it together with the also then developing trend for evil killer maniacs, Boogeyman plays to the crowd with slice and dice but it also plays against the genre conventions that were fast becoming entrenched. The power and skill of a film like this is if it leaves a mark in your head. This does and does without remorse. 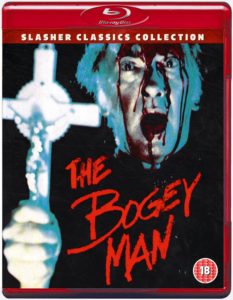 Extras are always a must but the standout is the interview. Ulli is great and his second film needs a full review and release as well!