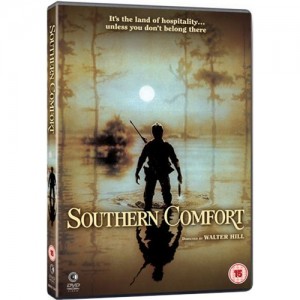 Though Bullet to the Head, Walter Hill’s first feature film in ten years, has had its theatrical release pushed back to February next year, it premieres today at the Rome Film Festival, where it screens out-of-competition; its director is also honoured by the festival’s first Maverick Director Award. Hill’s fans might admit he’s fallen by the wayside in recent years – the pilot episode of TV’s Deadwood and two-part mini-series Broken Trail are happy anomalies – and even if his latest work stars action veteran Sylvester Stallone, it’ll have to be a marvel of contemporary genre cinema to come close to matching the heights of his early directorial work (as a producer and/or writer, he also boasts credits on the Alien franchise).

One such work is Southern Comfort (1981), Hill’s fifth feature, which he wrote with David Giler and Michael Kane, and which reunited him with Keith Carradine, who had starred alongside brothers David and Robert in his previous film The Long Riders (1980). Though he gets top billing, Carradine is only one element of an ensemble piece that also features Powers Boothe, Fred Ward, Franklyn Seales, T. K. Carter, Lewis Smith, Les Lannom, Peter Coyote and Alan Autry (then known as Carlos Brown). Together, this band of character actors form a plausible National Guard unit whose routine 36-hour training excursion into a Louisiana bayou turns disastrous when they incur the legitimate hostility of several local Cajuns. A pre-opening credits scene paints the tribe as an oddly likeable bunch of makeshift military-men (as Coyote’s Sgt. Poole warns them, “For once in your life try to look like soldiers!”), before we accompany them into the woods, to the sounds of Ry Cooder’s pleasant rolling guitar.

Dissolves and serenity abound during the credits sequence proper, but it isn’t long before the film hauls its hapless lot into a brutal fight for survival, when they happen upon a river and decide – despite dissenting voices – to “borrow” the pirogues left there in order to sail down it. When one of the men unthinkingly fires a string of blanks at the Cajuns whose canoes they have taken, the consequences are soon realised when a lone bullet takes the group’s ranking officer out. In a panic, the men flip their vessels and swim ashore. Dazed by the sudden turn of events, they rally together with misfiring vengeance on their mind, struggling as much with their own internal conflicts and crises in leadership as with the perceived/actual threats that await them in the swamps ahead…

The unit is slowly drawn into the mechanics of a military operation. Assuming charge of the group, one character begins to use in-the-field jargon: “That’s just what the enemy wants! Fighting among ourselves!” Bemused by events, one character says it “just don’t seem right”. The absurdity of hierarchy is fully revealed, meanwhile, in one exchange: “Why the hell we following him?” one character asks regarding the group’s self-elected leader; “’Cause he’s got stripes,” answers another.

As a film in which a group of men volunteer upon a task that takes them into a hostile terrain that’s well beyond their resources, Southern Comfort invites allegorical interpretations regarding US involvement in the Vietnam War. Narratively, though, it might best be understood as a horror film, one whose ostensibly realist aesthetic allows for some plausibility with regard to the events therein. Indeed, the one-by-one slasher element here is made all the more tense because would-be sexed-up teens are replaced by brooding types such as Powers Boothe and Fred Ward; as Hill himself states in a 45-minute interview included on this DVD release from Second Sight, he subscribes to Howard Hawks’ claim that there is drama in the basic question of “will he live or will he die” (the quotation gives said feature its name). Depicting a collective’s fight for survival, Southern Comfort also resembles Hill’s own 1979 masterpiece, The Warriors, though it replaces that film’s stylised fantastical fight sequences with well-tuned moments of suspense, which find their culmination in the final scene, a suggestive and dizzying display of associative montage cut to the weird otherness of Dewey Balfa’s ‘Parlez vous à boire’.

Depictions of weird otherness, of course, have their controversies, and some might feel Southern Comfort paints its local indigenous population in a bad light. Crucially, though, for a large part of the film we assume the vantage point of the soldiers – we’re with them when they misguide joke-bullets at the natives, for instance – and are invited to empathise with the Cajun trapper (Brion James) when they blow his supply hut up and make him a hostage in his own territory. Hill’s reputation as a genre filmmaker might limit his appeal as a serious artist, but Southern Comfort boasts far more nuance than Deliverance, made nine years before it. Likewise, as the director admits in the accompanying feature on this DVD, we might not typically associate him with actors in the same way we do other directors; in this assumption too we’d be wrong, which might go some way to suggest that Hill’s film is a masterpiece with deceptive and rewarding subtleties.

WIN ‘SOUTHERN COMFORT’ ON DVD
Front Row Reviews have two copies of Southern Comfort to give away. Click here for further details.

‘Southern Comfort’ is re-released on DVD and Blu-ray by Second Sight on 26 November.