There is no one making films like Darren Aronofsky. Noah aside (although it’s not that bad really) , the writer/director from the US is forging a bold and distinctive furrow of his own making. It is no surprise he often struggles to get his films made, perusing the synopses of his canon isn’t exactly light bedtime reading. He pushes boundaries, challenges and often disgusts his audience, testing their own limits, cajoling their senses. His films are often beguiling blends of dreamy, character led drama and exhilarating, chaotic action. He builds worlds of fantasy, or brutal realism with idiosyncratic sharpness and focus on core conceptual arcs. He can create work of astounding beauty and poignancy, and with Mother! he may well have composed his magnum opus.

For those familiar with the work of Darren Aronofsky, Mother! falls somewhere between Black Swan and his gloriously flawed masterwork The Fountain. His latest film is a tense drama of fraught marriage and unwelcome guests, but it is likewise completely allegorical and surreal, littered with delicate substance and less subtle symbolism. 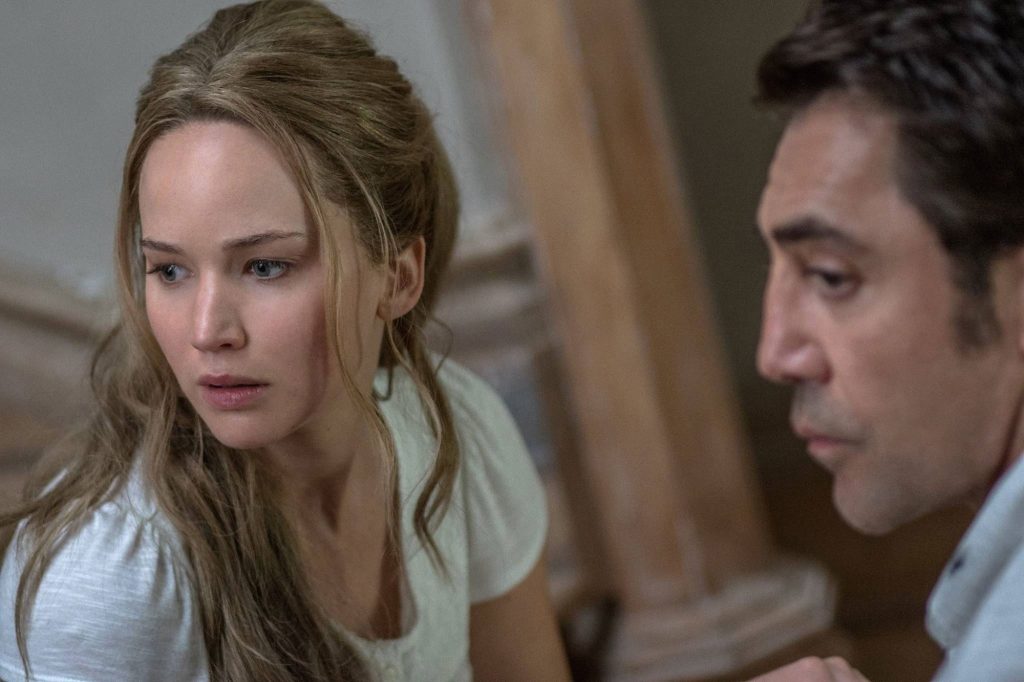 Aronofsky has been drawn to the biblical before and he is again with Mother! Most of the major plot points contain reference to the Christian holy book but he blends this meticulously with a cry for help for our natural world. On the surface there is a couple trying to avoid the pitfalls of early marriage, but beneath is a tale of a monotheism and its battle with the natural world.

The Earth provides for all but receives no credit, it is used and abused while humans continue to fall at the feet of their all-powerful god. Jennifer Lawrence and Javier Bardem play these parts exquisitely. The former as the innocent mother nature, beholden to all, benefactor, yet wary of outsiders. She is the dutiful housewife of the house she is building herself, making it beautiful, an Eden. Bardem is the god who demands love and adoration but bestows only words upon his dutiful followers. He allows them to take from the world without any reservation, as if it is his gift to give.

In reality they are a husband and wife. He, a poet, struggling with finding the words. She, a housewife, rebuilding their home by herself. He welcomes in a stranger, a doctor (Ed Harris) who mistakes their house for a B&B. Though she has reservations about this unwelcome intruder, she provides him with food and shelter. The doctor’s wife (Michelle Pfeiffer) joins him the day after and so begins an ever increasingly maddening tale of home invasion. Pfeiffer is dripping with a malign sensuality and hostile presence, she dominates the screen whenever present.

One of the less subtle suggestions in the drama is the contempt and dismissive attitude with which each visitor heaps upon the housewife, while hanging on the poet’s every word. From the initial Adam and Eve arrival, the tale of Cain and Abel plays out as the sons of the doctor arrive and promptly argue, resulting in the death of the younger. The funeral is held at the house and despite the hospitality, there is again disregard for her presence, with the mourners running amok. They leer and mock, ignoring her pleas for respect and calm. During all this the poet holds court. Only when his wife loses control at the destructive nature of the guests does he demand they leave.

Aronofsky begins the second half of the film with the New Testament heralding a new dawn, the poet and his wife are expecting a baby. However, the poet’s muse returns and with it, a new wave of followers to their paradise, beginning the frenzied slide into bedlam. Aronofsky takes us on a descent into the madness of the modern world, resplendent with violence, quickly changing figures of power but always, destroying the world around them. The writer is smart enough to have the odd visitor trying to repair the house as the destruction ensues, proving he is not completely giving up on humanity quite yet.

The familiar over-the-shoulder camera position follows Jennifer Lawrence so closely that her every sensation is yours. You can feel her apprehension, her anxiety, her pain and her anger. As her house fills with strangers the tension heightens and when the pandemonium begins, the camera flies from face to face, from room to room as wild panic takes hold.

The sound mixing also contributes to the raucous finale, the exquisite amplifying of the smallest sounds increases the feeling of concern felt by the wife, as the poet remains oblivious to her concerns. As she prepares tea, each clink of the cup is sharper, more piercing, so when one crashes to the ground the noise is deafening.

This cacophony and the series of seemingly otherworldly occurrences give rise to the notion that perhaps the strangeness is all in her head. The cloud of insanity that Aronofsky manages to produce around Natalie Portman’s ballerina in Black Swan is again felt here. Jennifer Lawrence is surrounded by oppressive characters, engendering a fragility, a weakness. Those around her seem so unconcerned with her indignation that it poses the question of whether it really exists.

The relationship itself is a wonderfully overdramatic expose of the trials of being the partner of a creative mind. The poet is destructive, prone to fits of depression, excitement, and anger. The constant need for adoration leaves his wife feeling isolated, unappreciated. In a theme that goes perfectly in tandem with the god vs mother nature allegory, she gives him everything, but he needs more, she is never enough. In the end, he, and the rest of humanity, can only throw it all away. However, Aronofsky’s vision, like mother nature, demands your complete appreciation.

Mother! is now available on DVD and Blu-Ray courtesy of Paramount