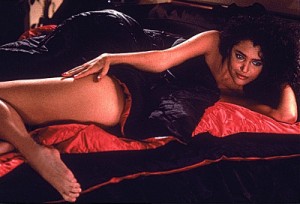 Society is a fickle thing. It is true that the rich live off the poor. Some are up all the way on the top and others are way down on the bottom. Billy lives in Beverly Hills and is part of a family on the highest heights of society. They are rich, powerful and mix with the powerful at ‘coming out’ parties. The only problem is Billy keeps getting these recurring nightmares, nightmares that his family want him dead. When his sister’s ex-boyfriend plays him a tape that records the events of the last party, he is suddenly sent into a new and twisted world. Society might just be more evil than he first thought….

Brian Yuzna was the sort of director that made films on the very edge of mainstream independent cinema. Films that were often released on VHS first and then found its way to cinema. They often had elements which sat uneasily with a larger viewership but gained mass cult following.You will know the director from his more famous work Re-animator and as with many others this will come as a delight, just as that did. Arrow films have released this masterwork and if you compared Yuzna to his contemporaries now, you can see how he used shocking visual effects were and still are. He used them as I would a simile,  in Re-animator for instance it was in response to the apparent sanctity of the dead. Here he has chosen to make the effects a parody of the 80s greed and consumerism.

The butt of all jokes...

This did make many rather hostile to the film, as it was seen not so much as a parody more a hostile attack on conservative values. Because of this it disappeared from the UK and it only came to my attention (and many others) via the excellent series Moviedrome. This screened the same version but it now looks even more amazing and the finale is utterly depraved, shocking and clearer a second time around. Darkly comical satire is woven into an intentionally vulgar and crass script which is still fresh and funny today. Viciously gory and fluid drenched action is excellently that will leave you wide mouthed and wry sardonic wit that will leave you speechless. Now I am not saying that the film is a master work of acting or direction. It is one of simple performance of visual effects and clever production. Now I have heard that a ton of lubricant was used for the finale but that isn’t the only reason to watch it. If you listen to the newly recorded commentary, you will find out the utter horror and complexity of making say a persons face come out of their anus. Did not think that would be something you wanted to know? Well after this film you will.