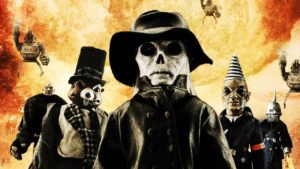 PUPPET MASTER : THE LITTLEST REICH follows on from the slash and stalk series of films released on VHS. Each episode twisted the absurdity of its locale, plot and figures, in to a mesh of marionettes with sadism at their centre and people as offal. PM: THE LITTLEST REICH might have stuck to this, as silly as that would have been. Instead it has veered along another course. Part historical reference to its past, part sardonic slash at the Nazi world we find ourselves in (as well as that hipster dystopia around us…) 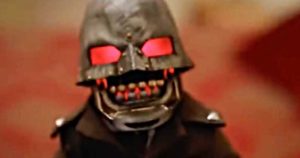 Andre Toulon (Udo Keir) is back. 30 years have past since the slice and dice, marionettes mayhem of the past. A convention is to take place at the Brass Buckle hotel in the same town to celebrate (or re imagine for a new generation) the murder spree. Three nearby locals led by Edgar Easton ( Thomas Lennon) decide to visit the attraction of marionettes, murdered bodies and the space which house said murdered peoples. When the convention slowly descends into a scene of continued carnage, it becomes clear this convention was a bad idea.

PUPPET MASTER has always had its respective tongue firmly in its tightly carved wooden cheeks. That said it was often played very straight to confuse those without a honed funny bone. PM: THE LITTLEST REICH has dispensed with that straight performances. It has also added over written dialogue, back story and ludicrous one dimensional characters. 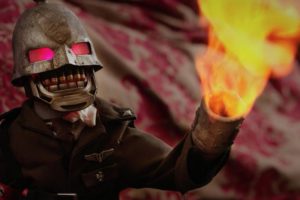 But it sets up something and particularly delivers enough to maintain the audience and fans. Be it the disturbed puppets, that are loitering with intent early on and deliver. The over writing defuses the seriousness of some of the subjects, as well as keep it obvious. The direction is efficient. Capturing the required scenes, blood splatter and tone. The addition of Barbara Crampton of REANIMATOR fame and Udo Keir, cult to their core. All in all, it makes an average film, moderately less average. Reminding me of the clever move BRIDE OF CHUCKY did. It is not as good as that, though it could have been.