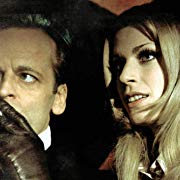 Riccardo Freda is the sort of name that cult film fans drool over. He has a legend, legacy and a filmography that many would die for. From his stunning THE HORRIBLE DR HICHCOCK to the dripping wet I VAMPIRI, his was an oeuvre most sublime. Along comes DOUBLE FACE from Arrow to settle the debate over his later period of work. Some saw it as being unbalanced ( other unhinged). Murder, sex and manipulation in wide doses are on display. Add to that a touch of insanity and you are there. All of this wouldn’t simply do though. Oh no. You need something else to sweeten the pill. That comes in the lead. Cult favourite and jungle trapezing warrior of iron, Klaus Kinski. 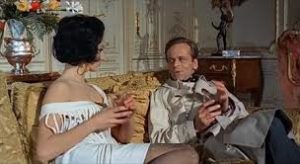 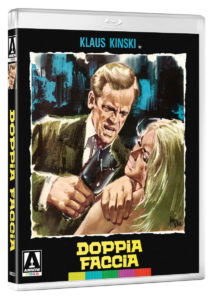 For meDOUBLE FACE is a hard Riccardo Freda to start with. It is not his best work, nor is it the easiest to watch. The blurb with the film states it is ‘Psychological, Psychedelic and sometimes plain psychotic.’ Well yes, yes and maybe.Refusing to distance the idea of exploitation and sexual desire, DOUBLE FACE will make modern (read self involved and self congratulatory) viewers squirm. You should not. Its asking you to examine what it is that is driving you watching this. Desiring the sexual, perverse fluids that zing through veins. Yes its clunky and caustic but equally perverse and profound. You can take it as a simple giallo that confuses its narrative but I take it as a joyous proud slash at the ages sexuality, perversion and emotional abandon. 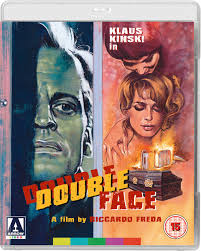 2K hip, hip hurrah! Finally a viewable cut of the film (both in Italian and English). As to the preferred version that up to you but the dire print I saw only 3 years ago on Youtube has been sloshed away.

Not many is the answer. The best is that Tim Lucas commentary. He of Video watchdog fame. Knows the actor, director and film so well as to be saturating you in information and tid bits…