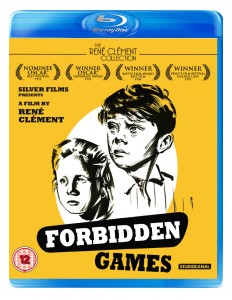 Historically situated between the engrained classicism of his nation’s mainstream cinema and the freer-flowing hipsters of la nouvelle vague, French filmmaker René Clément appears to be something of an anomaly. While popular accounts rank the likes of Jean-Luc Godard and François Truffaut among the New Wavers, romanticists – including Godard and Truffaut – regard Jean-Pierre Melville as their spiritual godfather. Perhaps because the New Wave’s common trends only emerged retroactively, history – most of it received and a lot of it unhelpful – has helped secure its practioners a reputation of somehow innate and irrevocable hipness (something which Godard for one has enjoyed long past his best-before date).

Consequently, the books are forever closed: you’re either in the New Wave or you’re not. No room for René Clément, then, whose 1952 film Forbidden Games (Jeux interdits) was a literary adaptation and a recipient of both an honorary Oscar and the Golden Lion, the Venice Film Festival’s top prize. Adapted by Jean Aurenche and Pierre Bost from a 1947 novel by François Boyer, its literary roots and critical prestige were perhaps wrongly misassociated with the “certain tendency in French cinema” that François Truffaut attacked in his famous 1954 essay, in which Clément was unfortunately singled out as one example of a tired aesthetic.

Paradoxically, in a critical age still bedazzled by la nouvelle vague, Forbidden Games is regarded today with something close to its own mythical status: that wrongly-discredited masterpiece which won awards and then was forgotten about and then was rechampioned again – firstly by Criterion in Region 1 (now out of print), and now by Studio Canal on Blu-ray and DVD, to mark Clément’s centenary. To be sure, it’s difficult to go into Forbidden Games entirely blind. Before the film proper starts, on-screen text informs/reminds us that it was given the Golden Lion at Venice due to the “singular lyrical purity with which it portrays the innocence of childhood amidst the tragedy and desolation of war.”

June, 1940. Young Paulette (Brigitte Fossey) is fleeing Paris for the countryside with her parents and many others. Amidst the chaos, a crescendo of planes is heard and we see an entire flight of German bombers overhead. When both of her parents and her puppy Jock are killed, Paulette flees the crowd and seeks refuge in a neighbouring field; there, she encounters Michel Dollé (Georges Poujouly), a boy a couple of years her senior. In pursuit of his father’s cow, Michel elicits Paulette’s help by promising her a replacement dog. Soon after, Paulette is taken in by Michel’s family and gradually warms to their way of life. 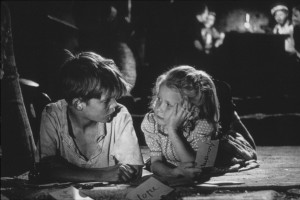 Of an atheist upbringing, Paulette is confused by the Dollés’ provincial religiosity. Learning the iconography and basic traditions of the Christian faith, Paulette – assisted by Michel – takes to robbing local graves of their crosses in order to build her own pet cemetery in the nearby mill (guarded sleepily by a 100-year-old owl named “The Mayor”). As a result of the children’s project, the Dollés’ come to suspect their neighbours – the Gouards – of the mass thefts; a graveside tussle between the two families’ patriarchs has a macabre quality.

For a film whose two lead performers are children, Forbidden Games is remarkably and sophisticatedly handled. Throughout, Clément evinces a certain feel for the natural and the lyrical; many scenes include delicate interaction with animals, and there are a number of tender moments between the human characters. At its centre, the film boasts one of the great screen performances by a youngster: five-year-old Brigitte Fossey gives an impossibly precocious debut here, anchoring her character even when narrative events drift away from the more brutal implications of the opening scene. Note the way Fossey shifts from despairing tears to a trusting smile when Michel first promises her a new dog, or the way she begins to cover her nose after an aggressive inquisitor tells her it twitches when she lies.

As told in the 30-minute featurette included on this Blu-ray/DVD, Forbidden Games was originally conceived as one third of a portmanteau film, and as Peter Matthews hints in an essay for Criterion, it is a “distinctly slender work. Which is to say that it’s exactly scaled to the intimate, laconic universe of children.” Indeed, though death and religion figure largely throughout, its narrative is filtered through a child’s perspective so that neither carries the stifled symbolism one might have feared, but rather retains an elliptical, poetical association that is imaginative and charged.

In this way, Clément’s work – which predates other greats on the destructive force of war upon childhood innocence, such as Ivan’s Childhood (1962) and Come and See (1985) – might best evoke Alain-Fournier’s 1913 novella, Le Grand Meaulnes. Though Clément’s film takes as its starting point the unthinkably premature scenario of being made parentless because of war – while Le Grand Meaulnes concerns the natural window between adolescence and adulthood – it evokes a lost youth with equally palpable and devastating energies. And to that end, the preface regarding its Golden Lion win is necessary and deserved.

‘Forbidden Games’ is released on Blu-ray and DVD on Monday 7 January.