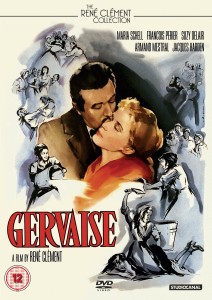 Soon after arriving in a rundown district of mid-nineteenth century Paris, a lame woman named Gervaise is abandoned by her lover and left to fend for herself and her two children by working in a laundrette. Marrying another man, she is able to buy and run her own laundrette after years of hard work; social conditions as well as petty jealousies, however, conspire against Gervaise, and as her husband takes to alcohol following an accident at work, her own hopes of a stable, happy life spiral.

Adapted from Émile Zola’s 1877 novel L’Assommoir by Jean Aurenche and Pierre Bost, Gervaise is a powerful – at times staggering – film deeply rooted to human concerns. It won the FIPRESCI and Best Actress Prizes at the Venice Film Festival, and is released on DVD for the first time in the UK by StudioCanal, alongside Forbidden Games, The Deadly Trap and And Hope to Die to mark director René Clément‘s upcoming centenary.

With a deceptively simple narrative, Gervaise resists easy synopsis, so complex is its depiction of human interaction. Frustratingly rare in film today, one gets a sense here that one is dealing with real people that exist beyond the screen. This is no doubt due in part to Zola’s original, which dared to report with great and careful detail on the realities of working-class life, mining what was for many a miserable existence in order to draw out a scathing criticism of their plight without sinking to caricature or worse. Its title, difficult to translate to English, referred to a slang term used in the late nineteenth century relating to binge drinking on cheap alcohol; in Clément, Aurenche and Bost’s work, the depiction of alcoholism remains intact, but other elements of a vibrant and often hostile social fabric are interweaved with much skill.

As Gervaise, Austrian actress Maria Schell gives an unmatched performance, conveying a woman with reserves of courage as she negotiates life amidst the social dregs. Her simple, voice-over revelation that begins the film (“Morning came – he still hadn’t returned”) gives good indication of the character’s resignation: failed by others from the outset, Gervaise seems made for abandoning; with one notable exception, the men in her life seem to all look and act alike. Raging at the rumours surrounding lover Lantier’s adulterous ways (Armand Mestral), she confronts her colleague Virginie (scene-stealing Suzy Delaire) and, egged on by fellow-workers, a lengthy and determined laundrette brawl ensues. 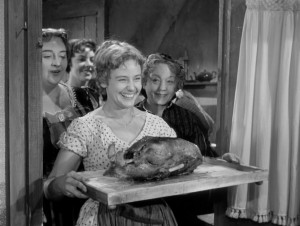 When the conniving Virginie re-enters Gervaise’s life years later (on Gervaise’s marriage, with half-veiled vindictive glee: “between a blacksmith and a roofer, you choose the roofer”), her jealousy regarding the latter’s success is made clear long before the title character herself ackowledges it – again, in voice-over, as if anything but a private address to the audience would be too difficult to bear. Things have a cetain inevitability about them here; as much as they strive, characters are undone by the unshakeable circumstances into which they’ve been born.

When Gervaise hosts a dinner party to mark the opening of her laundrette, Virginie’s husband Monsieur Poisson (Lucien Hubert), a policeman, clashes with fellow guest Goujet (Jacques Harden) over the political emancipation of the working class. Hubert’s Poisson is a stern and simple conservative, whereas Harden’s Goujet, a blacksmith with (reciprocated) romantic feelings for Gervaise, is politically conscious enough to know workers’ power can only be forcefully appropriated by those who want it. Goujet’s later imprisonment for upheld political beliefs is another abandonment enforced upon Gervaise, who soon after finds herself housekeeper to both hapless husband Henri Coupier (François Périer) and former love Lantier. While Coupier is a soft, self-pitying fool who drinks himself into a pathetic and moribund death agony, Lantier is an insincere leech who exploits Gervaise’s social vulnerability for his own end. The protagonist’s fate seems sealed.

One of the great screen heroines, however, Schell’s Gervaise ought to give modern audiences much to reckon with: a proud and hardened, defiant and aspirant multi-tasker whose successes and hopes can be dashed in the most fierce of ways. Note, for instance, that brutal moment when her husband Coupier, for whom like others a job is in some way an identity, slips down a roof, grasping at a safety rope but pulling hot coals down upon him, and falls himself to the street below. Clément directs with an understated ferocity, and demonstrates a master’s touch.