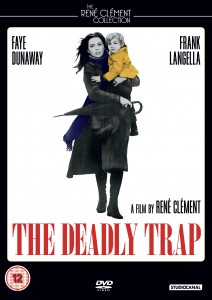 René Clément‘s antepenultimate feature, The Deadly Trap (La maison sous les arbres, 1971), is curious from its outset. Beginning with a wordless barge journey down the Seine – accompanied by Gilbert Bécaud‘s score – the film creates a melancholic swoon, with Andréas Winding‘s soft-focus photography lending a foggy air of mystery. In its first scene with dialogue, meanwile, the camera lingers, in an explicably sustained reaction shot, upon a child’s tears to an almost abstract degree. Clearly experimental, the film is an uneven but occasionally atmospheric adaptation of Arthur Cavanaugh’s 1966 novel, The Children Are Gone, and is released on DVD for the first time in the UK by StudioCanal, alongside Forbidden Games, Gervaise and And Hope to Die, in a move that marks director Clément’s centenary in March this year.

The Deadly Trap stars Faye Dunaway and Frank Langella as Jill and Philippe, an American couple living in Paris with their two children, Cathy (Michele Lourie) and Patrick (Patrick Vincent). Clément and his collaborators prefer to convey Jill and Philippe’s estranged marriage in a symbolic way, relying upon mise-en-scène and other visual motifs. Early scenes, for instance, feature Philippe tripping over stacks of his own books in reaching for a telephone, while later in the film he clumsily knocks over a lamp when trying to woo his wife; their flat is a cramped and cluttered space of volatile domesticity, made affordable by Philippe’s well-paying job but countered by Jill’s somewhat neurotic nature.

Purple and yellow feature prominently, and when the film introduces a missing-child element, its colour-dependent portrait of a deferred trauma-cum-prolonged marital nightmare in a foreign European city anticipates Nicolas Roeg’s Don’t Look Now (1973) and even Roman Polanski’s Frantic (1988).

Following a series of false starts, The Deadly Trap gathers momentum as an effective mystery thriller whose genre elements are cued by a persistent tonal discord. In essence, the film is an arthouse thriller with designs on a domestic drama, and attempts to merge the two by drawing our attention to certain parallels: the mysterious espionage firm with whom Philippe meets throughout the film refers to itself as “the Organisation”, while the numerous babysitters employed by Jill to take care of Cathy and Patrick are employed by “the Agency”. 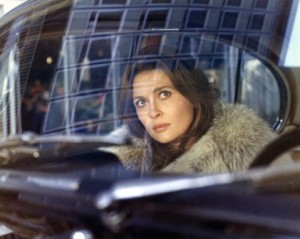 When it turns out, meanwhile, that both children have been kidnapped – following a lengthy and eerie sequence in which Jill frantically searches for them in an indifferent daytime Paris – the confirmation we receive is a shot of Cathy in some sort of locked basement; immediately thereafter, we see Jill, also in a prison cell (under suspicion from the local police). Jill’s crippled self-confidence, this juxtaposition seems to suggest, is a result of Philippe’s careerism – itself seemingly irrevocably entwined with the greater intrigues of corporate espionage.

Clément’s film feels very of its time: dated, that is, if no doubt sincere. Jill and Philippe’s unfolding crisis, which lies at the heart of the film, appears as a legitimate echo of some social crisis: Americans abroad, with the husband intellectually adrift and the wife – an aspiring artist – suffering from amnesia if not a crisis in confidence. (Jill, it is suggested, may or may not have contacted Philippe’s employers to complain about his salary.) Were parallels to Vietnam intended? Does the paranoia that pervades the film pre-empt the Watergate scandal? It’s difficult to say, because as the intrigues of the plot demand, a conspiracy is at work, and in the film’s latter stages, the racier thrills of its plot come to dominate. In a film that risks narrative lethargy, however, such a switch is welcome; its most magical moment, for instance, involves a gunshot, a smashed mirror and a cut to two pigeons flying high and free above Paris.

‘The Deadly Trap’ is released on DVD on Monday 7 January.