And Hope to Die DVD Review 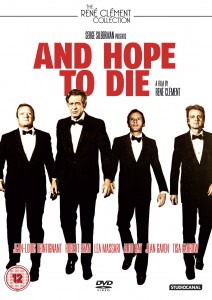 A globetrotting, space-hopping, is-it-happening-or-isn’t-it affair, the film stars Jean-Louis Trintignant (star of last year’s Amour) as Tony, a Frenchman on the run from a band of gypsies in America (arriving à la Once Upon a Time in the West‘s opening sequence). Stumbling into another runaway’s more unsuccessful getaway, Tony is taken in as a murder witness by a pair of gangsters. Driven to the bande à part‘s lakeside retreat – overseen by infallible crime vet Charley (Robert Ryan) – Tony romances moll/chef Sugar (Lea Massari) and quibbles with bulky dullard Matonne (Aldo Ray): “He started it!” yells Matonne; “not true!” protests Tony, who’s been confusingly nicknamed “Froggy” on account of his nationality (the confusion is that all the cast are speaking French, but most of the characters aren’t).

We’ve been warned of such child’s play in the film’s opening sequence, in which a young lad moves into a Marseilles neighbourhood and, under the gaze of a Cheshire Cat, tries in vain to befriend a group of gypsy boys before having his bag of marbles cut open. Bridging this curious prologue to an enthralling set-piece is a quotation from Lewis Carroll’s Through the Looking Glass: “We are but older children, dear / Who fret to find our bedtime near”. And indeed, throughout this crime caper, various references are made back to the children’s story framework. At various intervals, meanwhile, Tony prompts flash cuts to black-and-white photographs whose meaning are far from clearcut. Teasing and suggestive, And Hope to Die plays out like a gangster film directed by Alain Resnais. 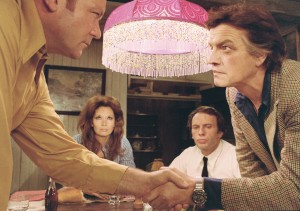 Tony, himself a fugitive, hijacks another’s escape plan so that the film suggests a kind of Russian doll structure, though Clément and co. don’t bring the reality into question until at least two thirds in, by which point they’ve mounted an odd and amusing parable on the ennui suffered by criminals during the downtime between jobs. Edmond Richard‘s cinematography brings much zest to an otherwise ordinary lakeside setting, and the various characters interrelate with an easily watchable charm, making a dizzying amount of casual wagers, the best of which involves stacking three cigarettes atop of one another.

Clément handles the film’s intermittent action set-pieces with deft skill: the first, in which Tony makes an escape by hopping from one field to another using a moving train as the only barrier between himself and his pursuers, is shot in one urgent take, while the climactic gun-toting “heist”, in which the gang do their best to botch their infiltration of a hospital ward, is memorable for its inclusion of an extended fire engine’s ladder from one building to another.

‘And Hope to Die’ is available on DVD from today.