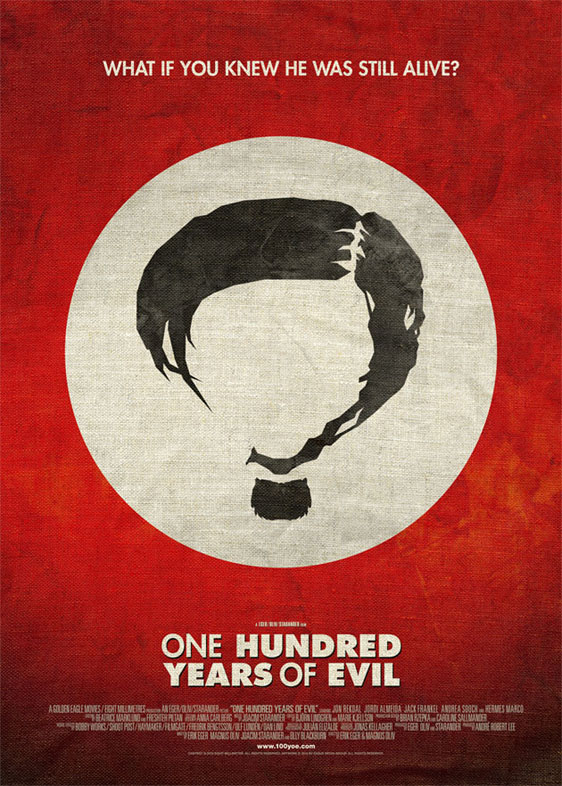 Adolf Hitler is dead, isn’t he? One Hundred Years of Evil insists he is not, that in fact he has been living a rather comfortable and subversive life in the United States of America. He has changed his name to Adolf Munchenhauser and has dabbled in everything from dishwashing to government work. The world was duped when told Hitler had perished in his bunker in Berlin, in fact he made a miraculous escape and was then sequestered to the States as part of a Hitler detection programme as they rounded up anyone who looked vaguely like Das Fuhrer. The US government released him back into society and try to thwart any attempts made to discover Munchenhauser’s true identity.

None of this is true of course; One Hundred Years of Evil is a faux-documentary that plays out like an investigative thriller. The story follows filmmaker Idelfonso Elizalde (Julien Elizalde) has teamed up with Norwegian researcher Skule Antonsen (Jon Rekdal) in search of the infamous Camp Rebecca where the Hitler lookalikes were held. As Skule gets closer to finding the true identity of Munchenhauser, shadowy government figures start to derail the pair’s attempts.

Erik Eger and Magnus Oliv have created a very slick film. Initially it comes across as a documentary but as the comparisons between Munchenhauser and Hitler start to become ridiculous, the film sheds its cloak and reveals the black comedy it truly is. Munchenhauser is inserted into old footage of McCarthy’s communist hunts. He is credited with the invention of soap opera and the creation of the first fast food outlet, ‘McBratwurst’. He is constantly labelled with stereotypical traits when remembered by those who met him and Eger and Oliv include their fair share of jibes at German typecasts. Almost causing World War 3 and initiating the space race the suspected Hitler has been busy in this darkly comic world.

Quietly amusing though never spectacular One Hundred Years of Evil provides an alternative history that moves from intriguing to witty to thrilling, capping of the film with an intense finale. A film that would be easy to dismiss as trite proves thoroughly rewarding.