Map To The Stars Blu-ray Review 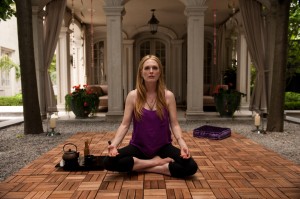 Featuring a powerhouse performance from Julianne Moore, David Cronenberg’s Map To The Stars is a look at the very real heart of darkness that has lived alongside Hollywood since the concept of celebrity began. Taking the view of the un-judgemental and placing a very definite satirical spin of affairs, Cronenberg and writer, Bruce Wagner (who based the script for Map To The Stars upon his earlier novel Dead Stars) have posed a set of difficult and polarising questions to the audience, which is bound to leave the mouths of those watching gaping open from the very start.

Following up from Cosmopolis, Cronenberg once more takes a world, often criticised for it’s indulgence and vice (capitalism, Hollywood etc) and pokes holes in theories and suspicions all the way through. Due to his delicate and very cleverly calculated filmmaking, he often creates these worlds as microcosms, often representing a bigger picture and one that much of the audience can find a way to relate to. Map To The Stars is a story, at its core, about all of us and our relationships with those people in our spheres.

Featuring an incredible all star cast, including Moore as Havana Segrand (a Lindsay Lohan-esque archetypal character that audiences have become used to seeing come out of Hollywood), Mia Wasikowska, John Cusack, Evan Bird, Olivia Williams, Robert Pattinson and Sarah Gadon. Each of these members of the cast are having a career best, as Cronenberg really allows them to discover the under layer of their characters and bring to the front all their issues, secrets and the darkness, which surrounds each and every single one of them.

Moore plays a once famous actress, who really has spent her whole career in the shadow of her dead mother (played by the incredibly haunting Gadon). 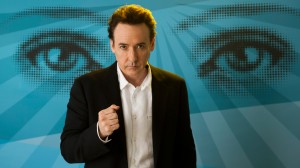 Havana’s best days are really behind her but she believes that an upcoming remake of her mother’s best film will be her saving grace, if she can win the role that her mother had played all those years before. She really believes if her agents speaks to someone, who speaks to someone else that she knows about her audition and how perfect she would be for the role, she is bound to get it. She can sleep with whomever she needs to, to get by, but Havana is moving no where fast. With her hair highlighted, her accent accentuated and every small movement becoming a theatrical performance, Moore is completely stunning on screen; often funny, sad, serious and scary all at the same time, she sets the screen alight with a performance, which is begging to win awards.

At the same time, Wasikowska’s Agatha Weiss has arrived in starry LA in hope of a new life. She wears long black gloves all day long and conceals a horrific burn scar down the side of her face and neck, but she doesn’t let that get to her. Agatha knows what she wants and how she is going to get it – as long as her identity isn’t actually revealed at the wrong time. She soon becomes the new aid to Havana, buries her way deep into the starlets life and becomes very comfortable indeed. She often meets with limo driver, Jerome Fontana (Pattinson, who returns to a Cronenberg picture after leading Cosmopolis), a wanna actor, who remains calm in the darkness of the world around him. He wants the world, if he works for it and it comes to him but he isn’t willing to step on anyone on the way there. Jerome gets under the skin of Agatha, he starts to really know her and this freaks her out as she pushes him away; possibly the only person that could save her. 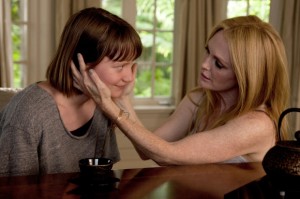 Working out like a wonderful piece of melodrama, Agatha’s family (Cusack, Bird and Williams) aren’t aware of her return and have no intention of opening their arms to her if they found out. It is this family unit, often the most traditional in the film, which is the most fucked up for so many reasons. Benjie Weiss (Bird) is a kid actor, who stars in a popular franchise but the studio is worried about his image after he becomes embroiled in a drugs scandal and his parents have their own dark secrets of their own.

Map To The Stars is a masterpiece of contemporary cinema; touching on so many different themes and exploring them in the vacuum of Hollywood allows Cronenberg to (as they say) throw the rocks at the glass houses. He swerves, filled with direction, amongst the variety of stories and pushes his actors to give thrilling and powerful performances. Pushing the audience to the gratifying and horrifying ending, he throws them headlong into a claustrophobic world, which finds all it’s characters alienated in some way. Watch it once and then watch it again, this is a great new chapter in the work of a hugely talented director.